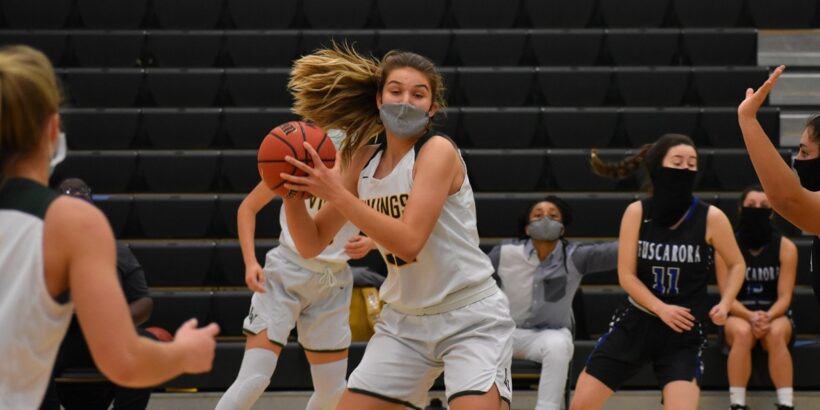 Sophomore forward Louis Volker was formidable in all phases of the game Thursday night, racking up 21 points and 10 boards.
Share List

On Thursday night the host Vikings got 21 points from sophomore forward Louis Volker and used a suffocating, zone-trapping defense to stifle Tuscarora, 58-27.

It was business as usual for Valley, which typically gets off to a fast start against opponents and never looks back. The Vikings frustrated Tuscarora early on by sending defenders from every which way at the Huskies’ ball-handlers. Tuscarora turned the ball over repeatedly in the first quarter, while the versatile Volker scored 11 points alone to help give her team a 17-5 lead after one.

The Huskies settled down and played much better in the second quarter, but still trailed by 15 at halftime. Things started to open up in the third quarter as Huskies sophomore guard Grace Middleton began to do some damage in transition. Trouble is, the faster pace opened up the Vikings’ transition game as well. With Volker and senior forward Grace Wagers controlling the defensive boards, the Vikings got running and scored 22 points in the third.

The game was essentially over at that point. Loudoun Valley (6-0) gave Volker plenty of offensive help with junior point guard Jane Bodamer and senior Kate Brennan each scoring nine points, and Wagers adding eight. Senior Sarah Cohoon added seven points off the bench and while junior guard Alison Pike had an off-shooting night, she spearheaded the Vikings defense up front.

Tuscarora (4-2) was led by Middleton’s eight points, and the Huskies did enjoy offensive contributions from eight players. A very young team with no seniors on the roster, Tuscarora will get a rematch with the Vikings on January 19th, this time at home.

It may not be a date to look forward to, however. Valley has been outscoring its Dulles competition this year by an average of over 38 points a game. The Vikings’ closest contest was a 20-point victory over Broad Run.

Their Dulles dominance looks very likely to continue for the time being.