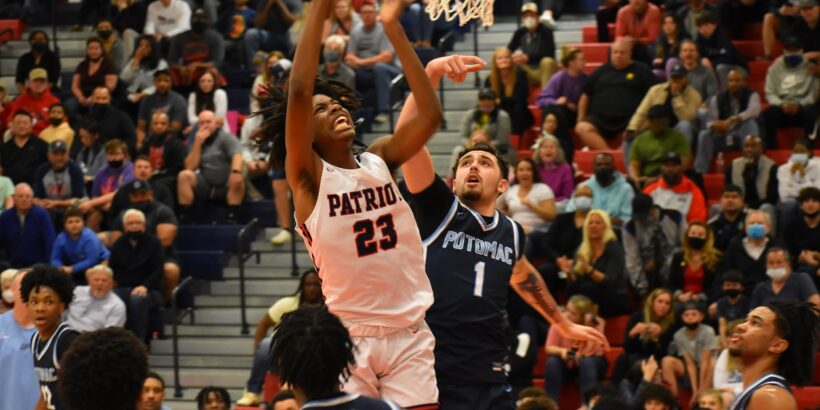 Despite leading for a majority of the game, Patriot High School trailed Potomac 56-55 with 39 seconds left in the 6B Regional Semifinals.

With the Pioneers’ season on the line, junior forward Jay Randall forced a turnover and sent a pass to senior guard Courtney Davis II, who attacked the rim on a fast break and drew a foul. Sophomore guard Dezmond Hopkins stepped in for Davis, who was injured on the drive, and sank both free throws giving Patriot a 57-56 lead.

The Pioneers would earn another stop on their ensuing possession, and a foul sent junior guard Nasir Coleman to the free-throw line. The Cedar Run Player of the Year converted one of two free throws to extend the lead to 58-56, and the Panthers took a time out with 6.8 seconds remaining for one final shot.

The Cardinal District Player of the Year Kyle Honore took the ball down the court and found a lane to the basket, but his layup fell just short. Potomac forward Frankie Lee grabbed the rebound, but he was met by Patriot’s Isaiah Vick as time expired. The Patriot gym erupted with excitement as the students stormed the court to celebrate the team’s win and advancement to the regional championship.

Bedlam at Patriot as two final Potomac looks are no good…@PatriotPioneers keeps their undefeated season alive and advances to states and the Regional 6B Final. pic.twitter.com/q9pZGo4ZKX

During the final timeout, Patriot head coach Sherman Rivers told his team not to foul as they made their last defensive stand.

“Be solid, we can get a stop,” Coach Rivers said. “We clearly didn’t want Kyle to get all the way to the rim. I think that he makes that layup 10 times out of 10, it just so happens that was the 11th time.”

Last year the Panthers ended the Pioneers season with a dominant 71-56 win on Patriot’s home court. Coach Rivers is an alumnus of Potomac , and was a standout player during his time there as he scored 1,193 points. The Cedar Run Coach of the Year also served as an assistant coach for Potomac during the Panthers’ 2014 and 2016 state championship teams, so he was well aware of their history and talent.

“They knocked us out last year and embarrassed us on our home floor in the region championship,” Coach Rivers said. “We were hoping to get the opportunity to play them and make up for the year before. Beating a team like that, with the history that they have feels good.”

Davis led the Pioneers with 17 points, six rebounds, and two steals, but he suffered an injury that briefly put him out of the game in the third and fourth quarter. Hopkins also had a big night, contributing 16 points, and four rebounds.

After the game Hopkins said that the key to the Pioneers success is their ability to shut down teams with their defense. Patriot knew it had to slow down the Cardinal District Player of the Year in order to win.

“We had to lock in on defense and make sure [Kyle Honore] couldn’t score, and we had to shut down [Jayden] Harris,” Hopkins said.

The game began with both teams leaving no room defensively, but the Pioneers earned a slight 13-8 lead after ending the quarter on a 7-0 run. Patriot started to pull away as the Pioneers led 21-11 late in the second quarter, but Honore and junior forward Jayden Harris led their team on an 11-0 run that put the Panthers ahead 22-21.

“They’re really good on the offensive glass and clearly have a great player in Kyle Honore,” Coach Rivers said. “We were able to slow him down, but Jayden Harris really hurt us for awhile there – he’s a very good player.”

Patriot immediately responded by ending the half on a 7-2 run to regain the lead at 28-24 heading into the third quarter. But Potomac would continue to rally back during the third, and success from the three-point line would help them enter the fourth quarter with a 40-39 lead.

The Panthers increased their lead to 50-45 halfway through the quarter, but senior guard Mike Ackerman shifted the momentum for the Pioneers when he stole the ball and was immediately fouled as he put up a shot. He sank both free throws to begin a 6-0 run that would regain the Pioneers’ lead, 51-50.

The Panthers eventually took the lead back at 56-55, before the Pioneers would pull away thanks to Davis and Coleman’s game-clinching free throws. After the game Coach Rivers was excited about the win, but knew the Pioneers will have to shoot better heading into the regional championship and state tournament.

“It feels good to get the win,” Coach Rivers said. “Going to the state tournament is a huge deal. Hopefully next game we can make some shots.”