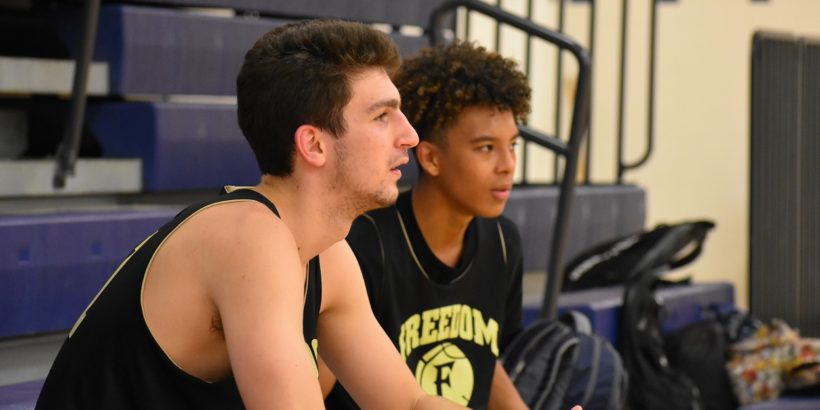 In any conversation about the county’s top players, Loudoun’s top post player cant be avoided. Lance Johnson’s 6’6” presence in any game is felt and is a large part of Freedom’s run to the 5A State Championship last year.

“Lance’s biggest strengths are his interior presence and his team and individual defense. He is a game-changer defensively. Last year he lead us in blocks and charges, plus he will often dive on the floor for loose balls,” says Freedom Coach Justin Powers.

“Lance really worked on his body. I think he has gained a great deal of muscle and he is looking more explosive, Lance is a very versatile player and he doesn’t have many weaknesses. College coaches like him because he is great in the post, but he can also step out and handle the ball and shoot the three.”

Lance’s talents didn’t go unnoticed last year as Freedom took off during the second half of its season after a rough start where he averaged 12 ppg and eight rebounds for the year. He was named All-Conference, All-Region, and All-State for the 5A runner-ups.

Lance Johnson won’t be alone this year, however. “We have some size, we have some very good shooters and a couple guys who can get to the basket. We have a team of guys that like to play defense and we often do the dirty work. If we continue to play that way I think we can be a dangerous team. We also have a nice mix of old and young players.”

Expectations are sky-high for one of the top point guards in the entire area and the state. Trent was first team All-State last year behind his 17 ppg and eight assists per game in his junior campaign. As Coach Dawson put it, “Trent is the best point guard we’ve had in my 17 years at LVHS.”

It is apparent when watching Trent that he is always pushing the ball up the court and into his teammates hands. “My biggest strengths are getting my teammates open shots, handling the basketball, and shooting. I like to play fast, getting out on the break off of steals or rebounds and getting an easy basket,” says Trent.

“He is a great playmaker who has already broken game steals and season steals records. He could break game assists this season. He is shifty with the basketball and can get to the rim and finish while drawing contact,” says Coach Dawson.

Trent has progressively made a jump in his talent year-to-year. “Trent is one of, if not the hardest worker, we’ve had at Loudoun Valley. He works everyday on ball handling and shooting. He has had a great offseason and has drawn a lot of college interest,” explains Coach Dawson.

Trent will be playing with a much improved team from what was already a solid team last year. “We are big, strong and athletic. Our offseason work is evident. We should be very deep and foul trouble will not be a concern this season as it was last season.”

Valley tips off in a much anticipated matchup between Potomac Falls December 4th.

Tyler Savage might be the most underappreciated player in the county. The East Carolina football commit has had to step into major roles starting in his freshman year, and it has led to Tyler being the youngest player in John Champe history to reach 1,000 points (even ahead of Dominik Fragala). Tyler was second team All-Region even though he often scored around 25-30 points last season and averaged eight rebounds a contest.

Tyler is one of, if not the most athletic player in the county. “My improvements are definitely my jump shot–I’ve been able to shoot the basketball but I think I upgraded it a lot more this season. And finishing dunks and posters I’ve also improved on,” says Tyler. “For me I have to continue to work on my shot and my craft ball-handling and shooting. Everything to make me unguardable.”

The Knights were a team that lacked depth and talent last year. “What I like the most is that we got a new coaching staff and brought in some new players; that will make our team unstoppable if we play as well as we should.” The Knights are bringing back lots of players as well as adding talent in some new faces.

Although John Champe is playing in a new conference, expect Tyler and the Knights to make major moves on the rest of Loudoun’s programs. John Champe opens up with Woodgrove on December 5th.

Landon Hawes is the next player on this list who has been productive for such a long time. Landon made a huge impact last year averaging 16 ppg along with seven rebounds a contest, earning him a spot on the All-State first team.

Landon is a guard but he certainly doesn’t look the part with his size at 6’4”. “I feel like I can do a little bit of everything inside and out with my size at guard really helping me. I like to play different depending on who’s guarding me because sometimes I will get a little guard on me and I take him down low, but when he’s bigger I like to work outside against him,” says Landon when talking about his strengths.

“I think I improved my finishing a lot as well as getting my shot more consistent and my pull up from mid- range has really improved. I think I got a lot stronger from last year.”

Potomac Falls is looking at another strong season after having an undefeated regular season last year. Landon and Jalen Coker look to lead the Panthers to a deep run throughout the playoffs. “I love how close our team this year is. I think we all really get along with each other and I love how we are getting slept on this year and I can’t wait for me and my brothers to prove everyone wrong,” explains Landon.

Potomac Falls squares off against Loudoun Valley December 4th in a battle between Loudoun’s historical powerhouses.

Matt Anderson has been a staple of Loudoun County’s team since he first stepped onto the court his freshman year. He is one of the most experienced players Loudoun has and certainly one of the most fun to watch at point guard.

Matt uses his very quick style to shred through defenses to set up others or get to the basket. “I love to push the ball up the court and play at an upbeat pace.” He makes defenses re-think their game plan because he changes the dynamic of the game as soon as he gets the ball. “We have a lot of great players that are really gonna be able to contribute on the court. I also don’t think any team is going to be playing a box or triangle on us because we have so many assets to go to if needed.”

Matt Anderson has been working on his strength, mid-range jumper, and leadership in the offseason to prepare for a potentially lethal Loudoun County team this year that might have the talent to make a big run. Alongside some solid returning players, and the addition of big talent in Mark Seigel, the Raiders could have a historically significant season.