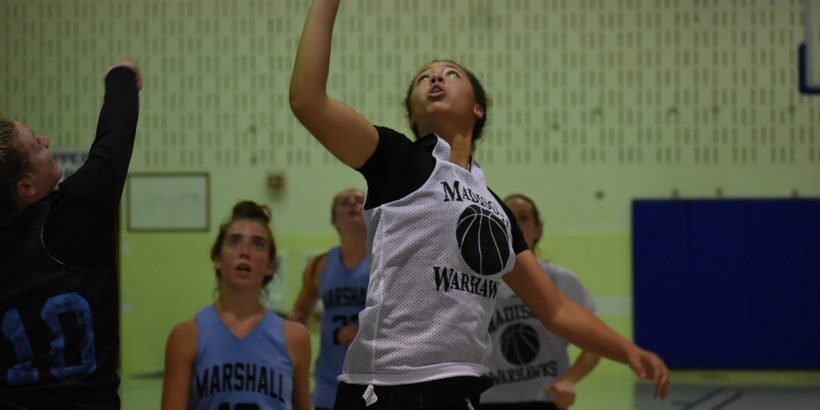 The Madison Warhawks had five fantastic freshmen burst on the scene last year to compliment an already solid squad. The Hawks lose Carolina Brusch and Sarah Conforti from last year’s team, which made it to the state quarterfinals, but retain everyone else and even added talent. Madison is a legitimate state championship contender this year.

Don’t cry for the rest of the Concorde, though. This is a very talented district through and through and we could easily see one of its other teams pin a loss or two on Madison and/or make a deep postseason run.

Chantilly made it to the region semis last year before falling to Madison and returns a lot of talent. Oakton is always well-coached and a playoff factor and this year will be no different. A young Westfield team took its lumps last year but will be far better this year and could be very good come playoff time. Don’t underestimate Centreville, too. The Wildcats retain the Squirewells who can take over a game at any time.

The talent in this district is undeniable. An All-District team from the Concorde stacks up against anyone’s extremely favorably. You don’t want to pair up with this district come playoff time.

The scary thing about the Warhawks is even with all their offensive firepower we consider Stone to be one of the region’s best defensive coaches. This is a team equipped to win a high-scoring or low-scoring game. A lot to mention, but start with sophomore Grace Arnolie. Arnolie was good early, but became a dominant scorer late in the season to include a 32-point performance in a win over Stonewall. With her will and confidence increasing, she figures to average around 18-20 a game this year.

She really doesn’t have to, though, because Madison is stacked. The Makrigiorgos sisters Tedi (signed with Trinity College) and Amalia are relentless and can shoot and drive the lane. Caroline Trotter is a wing with good height who is a three-and-D specialist. The other four sophomores (Alayna Arnolie, the Koshutas, Kohler) compliment Grace well and have star potential. If Madison is hitting threes they will be tough to beat, and 6’1″ Langley transfer Mia Chapman can get tough buckets inside.

The senior Meshanko and junior Kaloi were both all-District selections last year and give Coach Priester a great foundation to continue to build on. Both are impressive players that do a little bit of everything, including defend multiple positions. McMarlin, Vietmeyer and Zinzi were rotation players in 2018-2019 that must up their production this year.

Oakton will do what it always does under Priester–play great defense, take care of the ball, and run precise offense. The Cougars are annually a threat to advance to states and might do so again this year, but they will likely have to develop more perimeter scoring to do so. Priester told us his team will look to develop consistency on both sides of the ball and there’s a good chance that they eventually will.

The Bulldogs will continue to rapidly improve this season after foreshadowing the future at the end of last year with a nice win over Centreville to qualify for regionals. Junior guard/forward Gabby Reed looks ready to breakout after playing the point last year. She earned second team All-Concorde honors last season and is a tough and heady player who brings valuable experience to a still-young team. Sister Brooke is only a sophomore but contributes toughness inside.

Junior guard Sara Masaki looked good during the Fall and should be able to help with ball-handling enough to let Gabby Reed look to score more. As the lone senior on the squad Victoria D’Ercole is crucial as a leader and a motivator to the Bulldogs. Wing Shreya Sivaram had her moments as a freshman and will look to contribute more consistently on offense. Klippenstein cites rhythm and timing on offense as a whole as a big key.

Westfield will be good, it’s just a question of when. Could be a year from now or very, very soon.

Former North Stafford Head Coach Josh Regan is now the man at Chantilly, and he walks into a situation with a lot of potential. When you see Chantilly for the first time you wonder if they are a college team, they’re so tall. Lehigh signee Meghan O’Brien is a double-double machine and can hurt you inside and out, and Regan is also excited about coaching junior center Sophie Pavlech. Always a defensive factor, Regan feels the lengthy Pavlech is ready to put her self on the map with an improved offensive game.

That would allow some effective high-lows with her and O’Brien, to be sure. The guards and the depth will be the key to whether a good Chantilly team can become great. Megan Baxter is an underrated gym rat at the point and Skylar Bibbee can shoot. They’ve always been good but now they have to be better. If freshman guard Sara Huffman can step up along with junior post player Layo Johnson, the Chargers will have their depth and be very tough to stop. The squad has no seniors, which means this team should be primed for a run next year as well.

The Wildcats lose four starters from last year’s squad and play in the difficult Concorde, so sledding might be tough at times this year. But Centreville brings a nice base back with six varsity returnees and has the right coach in Clark to stay optimistic and continue to improve.

Plus it doesn’t hurt that there’s definitely nice young talent here. Junior wing Kaya Squirewell is a budding star. She had some big scoring games last year including 18 in a win over Westfield and has clearly improved after hard work in the offseason. Senior Jada Squirewell is a patient and smart guard who knows how to thread to the basket.

Newcomers Clark is excited about include freshman point guard Ryleigh Thurston, who Clark says has an impressive basketball IQ and work ethic. She comes into a great situation to play some minutes immediately alongside and backing up the Squirewells. Nikita Morris played JV last year and Clark says fans will be amazed at her athleticism.