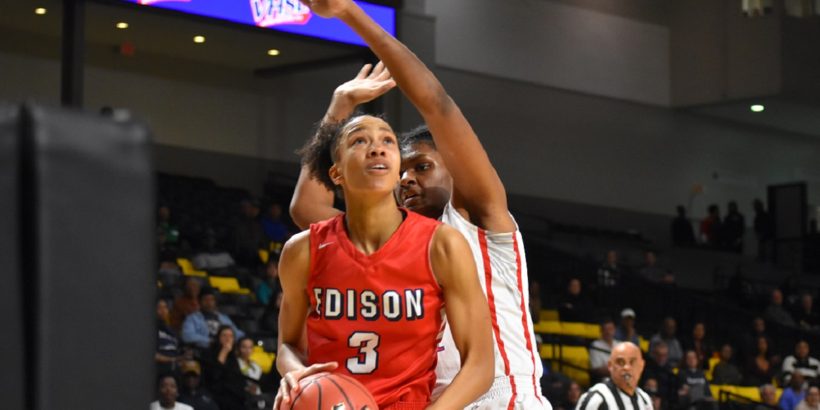 The Eagles' Tamrin Henderson is met at the rim by the Cavs' Brianna Jackson (15 rebounds).
Share List

Edison (24-6) fell behind early 19-8 and couldn’t recover, falling to Princess Anne in the Class Five title game. The Eagles battled back to make it 31-25 on a Carole Miller jumper early in the third quarter, but Princess Anne exploited its height advantage to own the boards. The Cavs (26-1) also forced an impressive 28 turnovers.

“Hats off to Edison, our challenger,” Princess Anne coach Darnell Dozier said. “They’re a very good basketball team…we beat them on the boards tonight and I don’t think they were ready for our speed.”

“I couldn’t be more proud of this team to get where we did,” Edison coach Dianne Lewis said after the game. “Everybody embraced their role this season and played hard to the very end of this one.”

Junior Carole Miller led the Eagles with 20 points and sophomore Charlotte Jewell added 12. The future remains bright for Edison, which returns many of its rotation players from this season.