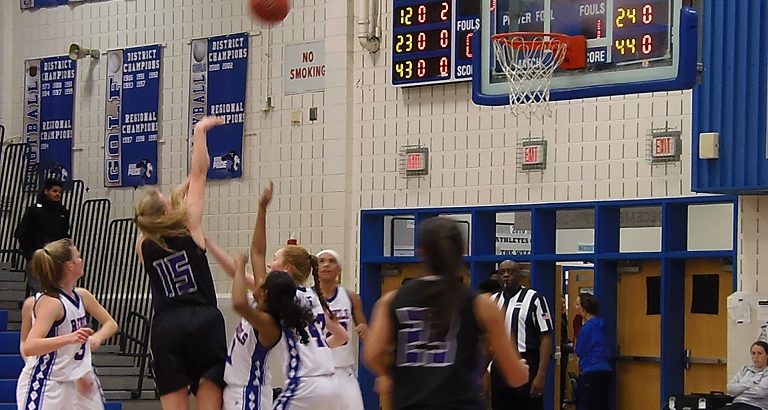 If defense does win championships, it might be wise to consider the ladies from Chantilly a threat to win a conference or a regional one in February. For now, the Rebel Round Ball Classic will have to suffice.

The Chargers simply played great defense against host Fairfax Thursday night to defeat the Rebels 53-30 in the Championship Game of the Classic. It wasn’t like they swarmed the Rebels and overwhelmed them physically. They just played good solid fundamental defense, rotating well and providing good help.

“The girls did well,” Chantilly coach Kurt Sporkmann said after the game. “They executed our game plan and did what they were supposed to do, which correlated into stops. It was a team defense mentality, nothing more than that.”

The Chargers started out the game on a 9-2 run, forcing a Fairfax time out after Charger junior guard Claire Roberts (eight points) buried a three-pointer. The Rebels, who seemed a little out of sorts the whole night, then regained some composure and whittled the lead to 9-6 by the end of the first quarter.

But the Lady Rebels simply couldn’t score in the second quarter, as Chantilly held them without a point for more than six minutes in the frame. While the Charger defense was solid, the Rebels consistently turned the ball over through unforced errors, especially travelling violations. The taller Chargers, meanwhile, just seemed to consistently get decent looks at the basket. They mixed inside scoring with outside range to race to a 25-10 halftime lead.

Perhaps drained due to a tough overtime win in the semi-finals last night, the Rebels just didn’t have the punch to mount a rally. They were only 1-13 from three-point range on the evening and didn’t attempt their first free throw until nearly the end of the third quarter. For whatever reason, Fairfax just didn’t have much mojo, but Sporkmann was extremely complimentary of the host team.

“I have a lot of respect for Pat’s [Deegan] program,” he said. “We’ve played them the last two years in the regional tournament. He gets every ounce of talent and energy out of his kids and they’re going to be fantastic. He’s got two freshmen that are going to be stars and Dom [Webster]–I love watching her play.”

Webster had seven points and nine boards to lead Fairfax. Chantilly was led on the night by its seniors. Grace Rauch hit for 17 points on six-of-ten shooting, and Lehigh-bound Mary Clougherty added 12 points, 13 boards and three assists. Hannah Reeves chipped in five rebounds and three assists from the backcourt.

The Rebels will open up conference play as they visit Madison on Tuesday. The Chargers will host Broad Run Tuesday before opening up their conference play at Centreville the following Friday.