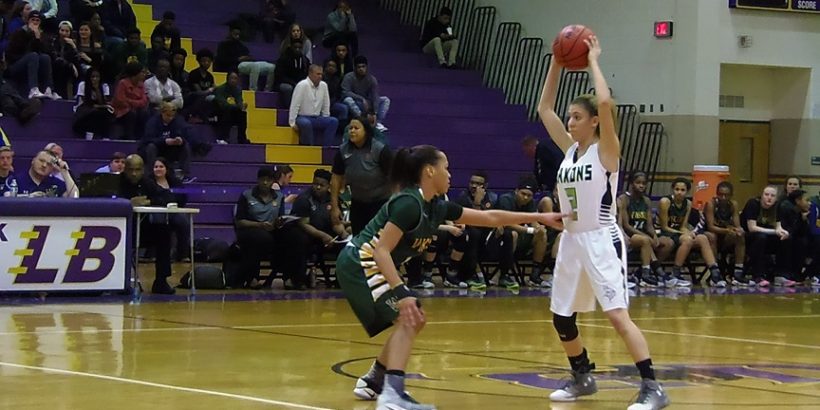 And the Langley bandwagon keeps rolling on.

The 6A North regional champion Saxons passed another major test Friday night, defeating a very solid Woodbridge team 55-40 in the state quarters. It was the usual story–good defense, balanced contributions on offense, great ball movement and ultimately experience shining through. Although tested by several Vikings runs that brought Woodbridge within two, the Saxons led the entire game.

As is also often the case, Langley raced to a sizable early lead. That’s never surprising but it was a little surprising most of the Saxons’ punch came from its frontcourt in the first quarter. After one period Langley led 15-6, with Ellie Buckley leading the way with seven points and Elizabeth Bucy four.

“I think they tried to take away the perimeter from us,” Langley coach Amanda Baker said. “We did a good job reading what was open and showed them we have more than our guards.”

Woodbridge started to mount a comeback about halfway through the second quarter in no small part due to its bench. Down 22-11, Vikings star guard Paris McBride found reserve center Jasmine Forte open under the basket for a lay-up. After a Langley miss McBride then was fouled taking it coast to coast. She hit one free throw to make it 22-14 and after a couple more stops freshman guard Aaliyah Pitts sank a free throw after drawing a foul on Langley’s leading scorer on the year, Jordyn Callaghan.

That was Callaghan’s third foul. She had to go to the bench and Langley was on its heels. But after Vikings senior sharp-shooter Hanna Oliver drained a three to cut the Saxon lead to four, Langley managed to settle down a little and preserve a 24-20 lead at the half.

In the second half Woodbridge kept the pressure on. Vikings reserve guard Tae’lor Willard made a driving lay-up to bring her team to within 26-24. But then Bucy buried a jumper. Willard scored again but this time Callaghan answered with a driving lay-up for Langley. After three quarters Woodbridge trailed 35-31.

The Vikings could never get closer. The Saxons extended their lead early in the fourth quarter, and then after a few defensive stops just ran clock and kept the ball in the hands of their guards. Senior guard Rachel Dunie was not a factor early but hit free throw after free throw late to ice the victory. Callaghan was instrumental in controlling the ball and defeating the Woodbridge full court pressure. In short, Langley took better shots down the stretch and controlled the ball better.

“We’re young,” Woodbridge coach Tamika Dudley said. “It’s tough to beat a team with Langley’s experience. To be honest they just played smarter than us.”

McBride and Oliver scored 10 points apiece for Woodbridge, which finished its season at 23-5. McBride also had seven assists. As mentioned the Vikings’ bench did well. Reserves Forte, Willard and Camryn Platt-Morris combined for 19 points.

Callaghan led the way for the Saxons (25-4) with 18 points and three steals. Bucy provided a nice scoring boost (14 points) in addition to her usual valuable contribution on the boards (11 rebounds). Dunie finished with 10 points, Buckley finished with nine and Olivia Augustini played the entire game, providing some tough defense.

The Saxons face a familiar opponent in the semifinals today, when they battle Oakton. The Saxons defeated the Cougars in the regional semifinals last week.