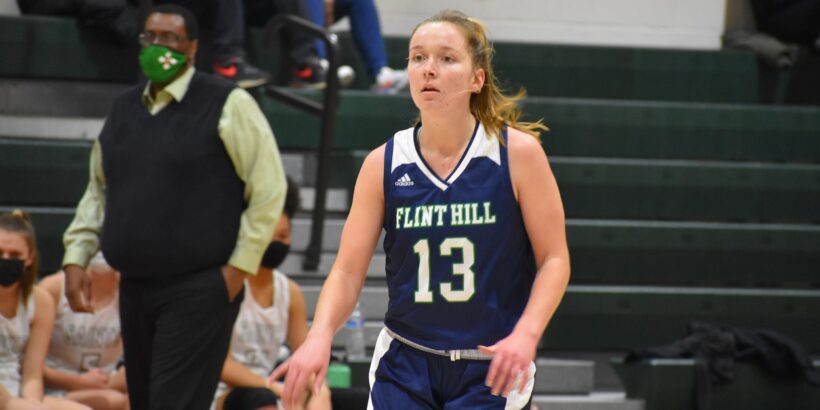 FIRST TEAM
G. Kelli Giuliani, Flint Hill
Giuliani’s statistics don’t always pop off the page at you, but the guard just gets it done. While she scores consistently, she rarely if ever takes a bad shot and hardly ever turns the ball over. Smart and talented, the VISAA First Team Division I selection will play at the U.S. Naval Academy next season.

G. Alexis Black, Word of Life
We saw Black almost bring her team back to grab a comeback win this season, with Word of Life playing four on five. That should give you an idea how good Black is. She’s good at getting defenders off-balance and then exploding past them to the basket. When the Appalachian St. commit is hitting threes, it’s really almost unfair.

F. Jaelyn Talley, Paul VI
Talley, Fiona Hastick, and Alyssa Costigan made the PVI varsity as freshmen way back in 2018, and really they’ve been the heart of the team in a lot of ways since then. Just a bunch of team-first, hard-working winners. Talley has gotten it done for what seems like forever, especially on the boards and on defense. Man, Stetson has to be elated to land a player of her caliber.

G-F. Kennedy Clifton, Bishop Ireton
Clifton has been one of our favorite players around Northern Virginia for what seems like forever. Her great height and athleticism allows her to do tough work inside, but her long strides and handle make her especially dangerous attacking from the perimeter and in the open court. We’re very excited to watch her play at Rice next season.

F. Kayla Rolph, The Potomac School
Rolph again crushed it for Potomac School, the do-it-all senior leader on a very good Panthers team. The tall forward could handle the ball up top, slide down low, and of course, bury the three. At William and Mary next year the CAA needs to remember to guard her from long range, or she will do a ton of damage.

SECOND TEAM
G. Kendall Dunham, Bishop Ireton
We always used to marvel at Dunham’s offense, but the guard is/was a very good defensive player also in 2021-2022. If she got a steal, she was gone in a flash. The WCAC Honorable Mention selection could shoot and score, and also made the highlight films with some extremely impressive dishes to her teammates. She’ll play at Johns Hopkins next year.

G-F. Lauren Mingo, Bishop Ireton
Dunham’s teammate Mingo gave the Cardinals a lot of everything as well, providing physicality and forcing turnovers from her guard/wing position. The versatile Barton College signee could defend multiple positions and she often did. Not sure if it was her number one thing or not, but we’ll always remember Mingo’s ability to get in the lane and sink a beautiful floater.

G-F. Jailyn Alston, Virginia Academy
Alston wrapped up her high school career with another great season, earning VISAA Division III all-state honors. Sometimes Alston just makes the game look easy with her strong takes to the basket and long-range jump shot. She’s certainly always been a dangerous defender who can get a steal by a quick swipe or jumping the passing lanes.

G. Alison Kunzwiler, Paul VI
A relentless fighter, we don’t remember Kunzwiler having too much trouble hanging with some of the area (and country’s) best guards. Really you could easily make the case that she was Northern Virginia’s best point guard this year, public or private. Her solid height and good shooting ability lets her play shooting guard, and she takes care of the ball as well as anyone.

F. Fiona Hastick, Paul VI
Like Kunzwiler, Hastick was an all-WCAC HM selection this season. Her ability to finish with either hand at the rim and superior footwork served Hastick well again this season. She personified the team as a whole–unselfish (a good passer), physical (a good rebounder), and a willing defender. She will play at Army West Point next season.

Lots more that deserve recognition. Costigan of PVI is as good as any of the 10 girls above. Heck, Paul VI’s whole senior class (Vandergrift, Eisner, Holler, etc.) deserves recognition really–they’re all playing next level. Sophia Ofosu did some work down at John Paul this year, Jane Elkins was solid inside at Ireton, Kate Oliver scored over 1,000 career points at Trinity Meadow View, and Hannah Boone was a very solid inside-out force at Episcopal.

Don’t sleep on Aaliyah Carlock, either–she lost most of this year to injury but she’s a great talent.