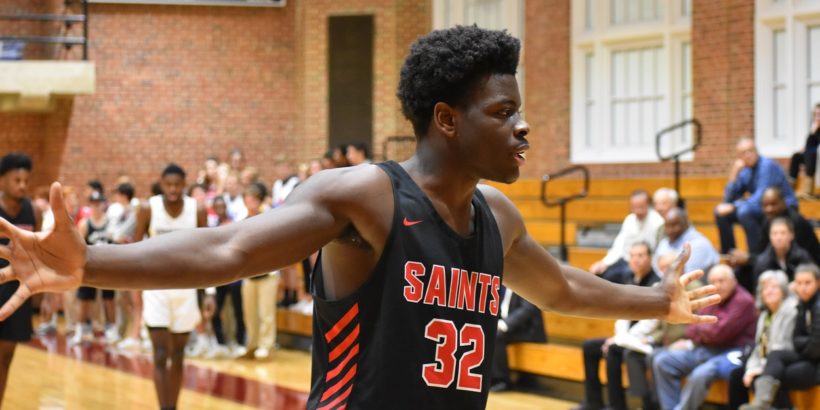 Saint Stephen’s & St. Agnes won a state title mainly due to its impressive depth of talent and defense, but it is hard to imagine the Saints doing it without Charles Thompson. We’ve long felt Towson got an absolute steal in Thompson, an active 6’6″ forward with long arms. He’s relentless on the boards, protects the rim to the tune of more than a couple blocks per game, and is excellent in transition–even as a ballhandler. He’s athletic enough to stick with a ton of guards on defense as well. Underrated no longer, the double-double machine was voted IAC and VISAA Player of the Year.

We’re not sure if Quentin James was ever underrated, but the Lake Braddock guard certainly got his due this season. Like Thompson a First Team Washington Post All-Met selection, James led the Bruins to an appearance in the Class 6 title game. He averaged about 23 points a game in the process, burying threes and getting to the line a ton in Brian Metress’ up-tempo system. We’re not exaggerating here folks–James got to the line 26 times in one game against South County. That should give you an indication of how difficult he was to stop, especially in the open court. James will play some other sport, we suspect football, at Steph Curry’s alma mater next year, Davidson.

Transfers aren’t always a great idea, but no question Jordan Hairston benefitted from transferring to Flint Hill from Westfield last year. On a team with amazing talent Hairston was often the headliner, many times delivering 20-plus points. The point guard punished teams that would sag to deal with the Huskies’ height, delivering floaters in the lane and three-point buckets as needed. He’s always been quick with great handles–this year he demonstrated conclusively he could play against bigger guards at a Division I level. And so he shall–Hairston signed with Texas A&M Corpus Christi a few weeks ago.

A taller three-point shooter fits naturally in this “starting” lineup, so we bring you Devon Parrish of Patriot. When this guy was on from outside the Pioneers were extremely difficult to beat. Parrish announced what kind of year he was going to have when he hit five threes en route to 28 points in a season-opening win over South Lakes. When teams gave him extra attention, he smartly created space for his teammates and concentrated on delivering them the ball and helping on the boards. With talented point Hagen Vandiver, who you could argue belongs here as well, Parrish helped form one of the best backcourts in NOVA and indeed, all of Virginia. He’ll play at Christopher Newport next year.

Qudus Wahab of Flint Hill continued to develop and dominate in 2019. The Georgetown signee was one of the more prized big man recruits in the nation. At almost seven feet tall he’s always been able to protect the paint and block shots almost at will. It has been fun to watch Wahab’s offensive game get much stronger these past few years as well. He’s got a nice spin move close to the hoop and has learned to ball fake, draw double-teams and hit open teammates for easy baskets. Not much more to say–NOVA’s most dominating presence and 20/10 guy Wahab will be missed. Good thing you can walk to the Exorcist steps from here.

Our “reserves” can do it all. Daniel Deaver of Marshall backs up Thompson and Wahab at the four and the five. Once again, you could make the case that no player is as valuable to his team as Deaver is. The Statesmen ran their entire offense through him, almost as a “point post.” More often than naught Deaver delivered some sick statistics as a result. Against Patriot he had 28 points, 21 boards, and six assists. The scary part is those weren’t too far above his season average, either. The 6D Region Player of the Year was simply dominant from the outside, inside, and everywhere in-between. He’ll be at the Naval Academy next year on the hardwood.

Not sure anyone we’ve seen in the existence of this website can score like Daryl Mackey Jr of West Potomac. The electric guard had some amazing scoring performances in 2018-2019, including 43 points in a win vs. Lake Braddock. He’s just so hard to guard with his quick and athletic first step to the hoop. He’s also extremely difficult to stop at the rim with his impressive vertical leap. The First Team All-State selection finishes his career as one of the area’s all-time leading scorers at close to 2,000 total points. Looking forward to watching him play at the next level.

One of the few guards around to rival Mackey’s explosiveness is Xavier Johnson of Episcopal. The George Mason signee had another wonderful season for the Maroon, helping to lead them to the VISAA state title game. He’s a point guard who knows how to get to the line, where he shoots over 80%. It’s especially impressive to watch him do it in situations where the shot clock is winding down or his team needs a bucket. Johnson averaged around 18 points a game this year. He’s a good defender and shooter who is ready to play college ball right now. He’ll get PT as a freshman in Fairfax.

Ian Anderson of Potomac Falls gives us a lot of versatility, as well as pure power inside. The 6’5″ forward racked up double-doubles in 2018-2019, but also impressed in other ways. He defended the rim well with his leaping ability and coach Jeff Hawes trusted him to bring the ball up the court when desired as a point forward. Anderson also showed an ability to pass the rock as if we were a guard. He put up some monster stat lines, including 33 points and 11 rebounds on senior night against Millbrook. Anderson will join Parrish at Christopher Newport next year–landing those two plus Jake Latta of South County is a bonanza for the Captains.

Cam Savage of South Lakes went about his business again this year, leading the Seahawks to the state tournament. On defense he was frequently spotted locking up opposing guards. On offense, with less support than last year, Savage upped his game. The small but physically strong guard averaged around 19 a game, attacking the rim and hitting threes. When he got hot from outside, like he did when he hit seven three-pointers in a blowout win over McLean, his team was very hard to beat. A humble and kind person off the court, he’s a vocal leader on it. Barton College is getting a good one in this guy.

Like Savage, natural point guard Evan Buckley had less firepower to rely on to drive and kick this year. So, Buckley showed his ability to score in 2018-2019. He averaged over 21 a game, riddling opponents both on the drive and from well beyond the arc. Not like Buckley forgot about his teammates though–seven to ten assist games were a pretty common phenomenon. With good size for a point guard and a constant motor, Buckley signed with Duquesne of the A-10 a few months ago. The Dukes are thrilled to get him–the first Division I college basketball player in Stone Bridge history.

Also headed to Pennsylvania (Millersville) to play at the next level is Alex Fitch of Rock Ridge. The 6’4″ shooting guard filled it up in 2018-2019, eclipsing 30 points on seven occasions. He averaged about three-and-a-half treys per contest and this year did a good job utilizing his teammates when he wasn’t open. Known as a deadeye shooter, he’s also a good athlete who can get to the line and contribute on the boards. The Phoenix’s all-time leading scorer will not be easily replaced, although it certainly helps that brother Evan is on the squad.

We’ve talked about offense a lot lately–now let’s talk defense. Jon Hylton is really good at that. The forward can play it down low or on the perimeter against virtually anyone. He’s strong and athletic and plays really smartly. He knows how to control the ball and the place of the game. He’s versatile on offense as well. Hylton can post up inside, hit from outside, and whip sweet passes off the dribble. We love this guy coming in at the three when we want to go big or at the four when we want to go small. Really, he’s good enough as a ball-handler and a rebounder to play anywhere.

The Centreville Wildcats have just gone about their business winning the past 2-3 years. Now the challenge is to do it without do-everything guard Bryce Douglas. It’s easy to just take for granted how good Douglas has been. This year he averaged just under 20 points a game and often piled up rebounds and assists in the process. Comfortable both at the point and as an off guard, Douglas is one of those guys that gets it done by smartly varying speeds on offense. He’s a great pure shooter who shoots north of 80% from the line and buries threes. He’s also a good defender. We’ll miss him and all these guys next year.

There were a ton of guys in Honorable Mention that deserve a write up. Savage can tell you how good guards like Matias Prock of McLean and Ryan Van Kirk are in the Liberty District, and what they’ve meant to their teams. You could easily argue shot-blocking forward Trey Barber of Christ Chapel belongs on the team. Jaquan Johnson-Terry of T.C. Williams, Christian DePollar of SSSA, Antwi Asante of Gar-Field–these are guys we could plug in on this team and not skip a beat. Congrats to all.