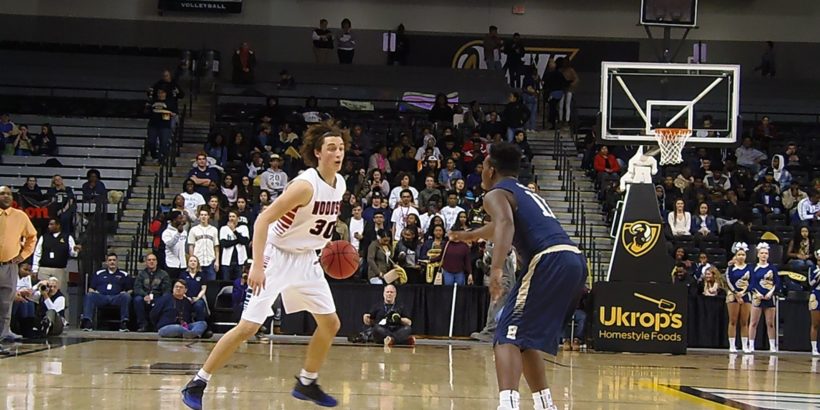 The revamped Patriot District brings back a number of heated rivalries from years’ past, and this year the competition will hold particular interest based on conflicting team styles. There’s teams that want to play fast (Woodson, South County). There’s a team that wants to play very fast (Lake Braddock). There’s a team that wants to play faster than last year (Fairfax), and there’s teams that might be wise to go at a more deliberate pace (Robinson, West Springfield). Controlling the pace of the game will be important on most nights, and road wins are very likely to be hard-earned in a district where teams might develop a little animosity toward one another at some point…if they haven’t already.

The Woodson Cavaliers enjoyed their first state title in 54 years last season. While state titles aren’t exactly easy to come by, Doug Craig’s team on paper at least has the potential to duplicate last year’s magic. At the very least his team begins as the favorite in Patriot.

Rangy and athletic senior guard Matt Urbach and senior forward Nate Spurlock return after averaging around 25 a game combined as the team’s second and third-leading scorers last year. Both have Division I offers and according to Craig have improved in the offseason. So has 6’8″ junior center Cody Mains, who provided a nice defensive lift to the team after entering the starting lineup midway through last year. People know those three guys, but they may be surprised to learn the Cavs have more firepower returning than that.

“People are going to be surprised with how good some of our other guys are,” Craig says. “We had six other juniors [than Spurlock, Urbach] on our squad last year that return. Sean Nickel is getting Division III interest and Brian Hennessey can play too. They’ll be big factors for us.”

Those seniors will make an impact, as will Bishop Ireton transfer Joey Lee. Lee is a point guard who played on Ireton’s JV last year. He looks to contribute almost immediately.

It would seem Coach Craig has little to worry about, but we have yet to meet the coach who didn’t worry about something with his squad. While his seniors last year provided defense and gritty points when it mattered most, Craig is most worried about missing something else those players gave him.

“Leadership. Those guys were probably the best group of captains I’ve ever had,” Craig says. “I didn’t have to worry about hardly anything in the locker room last year or effort on the court. Those guys brought a lot to our team but the thing I’m most worried about replacing is their leadership. Jason Aigner could shoot and score, Simon Mulaa could play great defense but we have guys that can step up and do those things. Our seniors this year have to lead as well as play, though.”

The South County Stallions might have the ability to win the district, but they’re going to need a lot more consistency than they had last year. A fairly talented team, the Stallions nevertheless played below .500 ball and were easily bounced in the first round of the regional tourney by Madison.

Coach Mike Robinson believes better things are just around the corner, however. O’Connell transfer and Rice commit Quentin Millora-Brown is a big reason for that. The 6’9″ forward is extremely coordinated for his size and seems equally comfortable moving around the perimeter as he does in the block. Millora-Brown’s ability and his basketball smarts give Robinson a fantastic player to build around–he’s a guy that should easily produce a double-double each night with perhaps a few triple-doubles to boot.

Three players who received major minutes also return from last year: senior guard/forwards Seth Dunn and Branden Powe, plus junior guard Noah Bullock. But the X-factor might be 6’6″ junior center Jake Latta, who Robinson says has taken a huge jump since last year. If that’s the case it’s hard to imagine teams around the region being able to manage both Millora-Brown and Latta down low.

The Stallions are still fairly young overall but with that inexperience comes a couple of positives as well. The sophomore class is extremely talented and most of them seem committed to basketball as their first sport. They have athleticism and outside shooting to space the court–all the ingredients seem there for a nice season. But South County has to develop team chemistry and learn how to play together in a hurry if the Stallions are to realize their potential.

“Our young kids are going to have to learn pretty quick,” Robinson says.

If you like high-scoring basketball you’ll be happy to know that coach Brian Metress has no plans to scrap the high-powered offense the Lake Braddock Bruins implemented last season.

“We have to at least start out that way,” Metress says. “I mean, it worked and we started to win some games. Fans enjoyed it too–fun to watch those high-scoring games. We’re going to be a pressing and running team on offense.”

After a slow start the Bruins did start to win some games, culminating in a memorable first-round upset of Hayfield in the regional tournament. The Bruins return a lot of their talent from last year’s team, most notably talented two-year starting guard Quentin James, who averaged 18 points a game last year. Seniors Jordan Cobb and Noah Dunn return, as do shooters Sam Grable and Will Cullen. Lake Braddock does lose guard Corey Pelham (Virginia Wesleyan) from last year, however. Not only did Pelham score over 23 a game last year but…

“People don’t realize that at under six-feet tall he was our leading rebounder as well,” Metress told us.

The rebounding burden has to fall on everyone since the Bruins’ weakness is obvious–a lack of height and inside presence. You’ll see versatile players like Cobb at point guard just as soon as you’ll see them playing “center.” If Lake Braddock can’t clear defensive boards it will make getting out in transition and shooting open threes that much harder.

But lack of size might very well be a weakness the Bruins can overcome. They’ve got talent, depth and one of the most experienced coaches around in Metress. They’re likely to have a successful season and even in games they lose they’ll be extremely fun to watch.

You might think the Robinson Rams will be hard-pressed to contend in the Patriot this year. The Rams lost around 45 points a game from their departed senior class and have their third coach in three years–former Lake Braddock assistant Ben Gildea. But the Rams will be extremely hard to defeat if they can just keep the tempo manageable.

That’s because Robinson retains a lot of size and talent. Start with 6’7″ senior post player Anthony Douglas, who led the team in scoring a year ago despite the talented senior class. He’ll be tough for anyone to stop in the low post. Add in Greg Rowson, a senior forward who only averaged around six a game last year but got bigger and more athletic during the offseason, also improving his overall game tremendously with the NOVA Cavaliers. He can hurt you inside and out. Those two alone are going to do a lot of damage this year.

They are going to need help from the other seniors on the squad and the junior class in general. A major sleeper might be junior Brien Krug, a tall guard with ridiculous range. If he’s healthy after significant injuries in the past year he could be a major factor opening up things inside for Douglas and others. Junior Sergio Delgado is another candidate to provide offense as well.

The Rams will likely pack the paint on defense and beat a lot of teams that can’t exploit their lack of a traditional point guard or in transition. They’ll have to control the pace and keep scores reasonably low to have success.

That was the Fairfax Rebels‘ modus operandi last year, but this year coach Mike Barbee’s squad will play things a little differently.

“I think people are aware we want to play a little more up-tempo this year,” coach Barbee says.

That’s because the Rebels aren’t quite as tall and frontcourt-oriented as they were last year. Their frontcourt remains talented, however, with 6’5″ senior KC Colbert returning. Colbert scored seven a game last year and the offense will flow through him. Barbee describes him as the best passer he’s ever coached.

Chase Ackerman also returns. A novahoops.com All-Freshman selection last year, Ackerman’s shooting touch and basketball acumen continues to grow. He’s a big guy still learning to play guard after being a post player most of his early basketball career. Barbee will also rely on a bunch of Ackerman’s fellow sophomores–he says four or five will make an impact on varsity this year. Count holdovers Daniel Mbangue and Josh Abtew among that group. Both are guards with good size and potential. T.C. Williams transfer Ricky Peters could factor in as well.

Still a young team, the key to the Rebels success this year might be the other seniors than Colbert. Jacquez Napper is a gutsy, athletic guard who has an opportunity to thrive in Fairfax’s more wide-open scheme this year. Defensive whiz Aziz Abousam’s play will also be crucial–the Rebels still have to maintain their focus on the defensive side of the ball even while attacking quicker on offense.

Expect Fairfax to take some time to get comfortable with its new identity, but also expect the Rebels to be just as dangerous by the end of the season as they were last year when they upset South Lakes in the district tournament and almost upset West Potomac in regionals.

The West Springfield Spartans for the second consecutive year lost a lot of their scoring and experience to graduation. Most of their leading scorers from last year’s team are gone. But coach Durmia Marshall still has one of the district’s best players in Millersville commit Gabriel Kier. Kier is a tough-minded guard who averaged well into double figures last year and got points when the Spartans needed them most.

The Spartans play hard, but Marshall will need several players to step up if his team is to challenge in the competitive Patriot. Senior guard Sam Treasure does return, and he seemed to produce more and more as last season wore on. He’ll have to continue to increase his production, as will an inexperienced junior class.