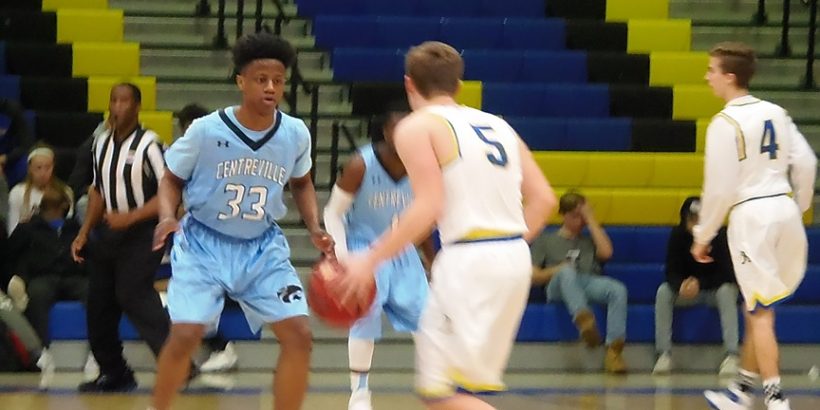 The Wildcats' Bryce Douglas was Mr. Clutch, winning more than one game in the final seconds.
Share List

Bryce Douglas, Centreville–Maybe the most clutch under-classman around, Douglas was key in winning several games all year for the Wildcats en route to their first district title in over a decade. The Bishop Ireton transfer averaged 15.6 points per game and was also very active on the defensive side of the court. Player of the Year from the Concorde, teams couldn’t stop Douglas even when they knew he’d get the ball late. Hudl highlights here.

Daryl Mackey Jr., West Potomac–Scored in double figures in every game he played in except the first game of the year vs. Madison. Averaged almost 20 points a game to lead the senior-oriented, talented Wolverine squad in scoring. Has outstanding athletic ability and can light it up from long range.

“Daryl is an unselfish player that you’d never know was a star watching him walk around the school. Due to that demeanor I think it made it easy for the seniors to embrace him as a teammate. He never boasted or bragged, even when scoring 33 in a region playoff game. He never complained when he was left off last year’s and this year’s all-tournament team for our conference. This year he led the tourney in scoring and last year had 22 in the title game and the win. Those attributes, plus his extremely hard work ethic and competitiveness made it easy and cool to coach him and be a teammate of his. His explosive, sneaky athleticism, killer mentality and nice touch around the basket will continue to make him a terror for defenders around the state. He really listens well, has bought into our system and program and truly tries to improve each practice and game. He never misses a workout, practice, team camp or off-season game while playing on a top AAU program in the nation.

Ian Anderson, Potomac Falls–6’5″ forward who can step up and dominate when he needs to, but was also content doing the dirty work for a Potomac Falls team with talented senior guards. Athletic and strong for his age, he can block shots and control the paint in an increasingly guard-oriented game. Not a bad free throw shooter, but takes another step forward converting those at a higher rate and developing a more reliable perimeter shot. Followed up a magnificent 22-point performance vs. Tuscarora by pouring in 36 points against Dominion the very next night. Hudl highlights here.

Anthony Harris, Paul VI–Shooting guard finished as the second-leading scorer on a 28-win Paul VI team that fell in the VISAA title game to Trinity Episcopal. Averaged over 11 points a game and seemed to save his best games for quality opponents. Poured in 25 points in a loss to Gonzaga and scored 26 in a hard-fought win in the VISAA semis against Cape Henry. Receiving significant interest from major Division I programs.

Evan Buckley, Stone Bridge–Point guard averaged 17 points a game. Still managed to dish out assist after assist despite shouldering a lot of the scoring load for the young Bulldogs. Scored 21 points in the fourth quarter alone in a loss to Kecoughtan en route to a season-high 28. Scored 23 points and dished out 10 assists in a playoff win over Massaponax. Has college offers from American and Bucknell. Hudl highlights here.

“Evan defines what a true winning point guard is. He makes others better, has all the intangibles and the ability to take over a game, and is a big-time shooter. Being a former DI coach myself it is no surprise he holds multiple DI offers already and that list will continue to grow as he gets better and better everyday.”

Cameron Savage, South Lakes–Steadily improved in his sophomore campaign, forcing far less shots than he did as an inexperienced freshman. Given the “keys to the car” at an early age, starting at the point for a talented Seahawks team for two years now. Dynamic and athletic guard is capable of steals by the bushel and seemed to get up most for quality competition, scoring most against solid teams like Hayfield, Woodson and West Potomac. Has the potential to be as good as almost anyone in a year or two.

Jaquan Johnson-Terry, T.C. Williams–A nice consistent scoring threat for a young and inexperienced Titans team still flush with talent. Hybrid guard who averaged 15 a game and scored in double figures his last eight games. Hit five three-pointers in a win over South County and scored 26 in a win over Dunbar. Understands how to get his within the flow of a game and how to try and get teammates involved.

Charles Thompson, St. Stephen’s & St. Agnes–Big guy who plays down low for the Saints, overshadowed at times by the team’s talented guards. All-IAC selection who happens to also be a talented football player. Big and strong but also athletic and can block shots. Part of a balanced attack for St. Stephen’s & St. Agnes but can step up scoring-wise when called upon, such as when he scored 16 vs. Episcopal or 15 vs. Bishop Ireton. Perfectly content to set strong picks, control the boards and let the guards get it done, however. Hudl highlights here.

Quentin James, Lake Braddock–Stats are inflated somewhat by Coach Metress’ new up-tempo style, but James can flat out play. Was averaging around 13 a game even before Lake Braddock went full Westhead. Really just a matter of developing more physically before reaching the next level in his game. Scored 26 points twice against West Potomac. Scored 25 points twice against Hayfield. Shot almost 75% from the line and gets there a decent amount. Athletic, smart and capable of playing good defense against multiple positions. Hudl highlights here.

Xavier Johnson, Episcopal–Guard seemed to step up more and more as the season wore on. Poured in 30 points in a loss to St. Stephen’s & St. Agnes. Can hit from long range, but has to also attack the rim since he’s an extremely good foul shooter who hits around 90% of his attempts. Very athletic and a good passer. Hudl highlights here.