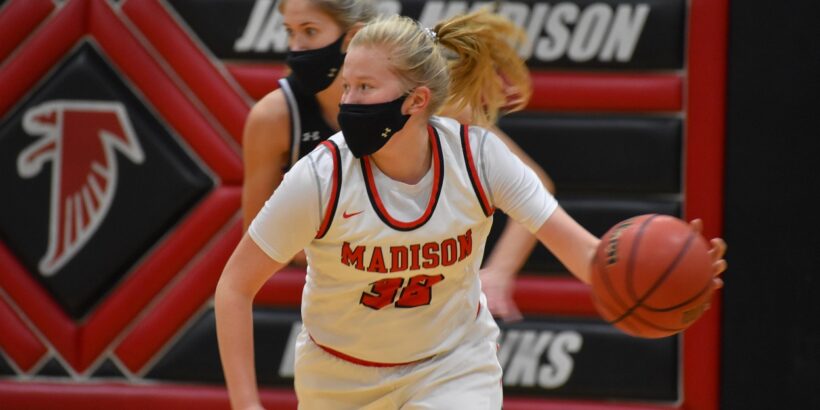 Chantilly played a fantastic first half against host Madison, leading by double-digits for a good portion of it. But on Saturday night the talented Warhawks demonstrated you have to sustain that level of play for an entire game to have a chance at beating them.

Junior Kathryn Koshuta scored 16 points, and Madison outscored the Chargers 16-4 in the third quarter to take control and remain undefeated with a 47-42 victory.

Though Madison has only lost one game in the last two years, the Warhawks knew coming in beating Chantilly would be no easy task. Not only talented, the Chargers are one of the taller teams in the area, and Madison is missing bigs Kiera Kohler and Mia Chapman to injury.

Chantilly (1-1, 6-1) roared out of the gate, playing great defense and controlling the boards. The visitors outscored Madison 14-3 in the first quarter, getting great ball movement and taking efficient shots. By contrast, Madison was kept out of the paint and was one-of-nine from three-point range in the quarter.

While the Warhawks started to claw back toward the end of the half, Chantilly maintained a 26-17 lead at halftime. Senior forward and Lehigh commit Meghan O’Brien was dominant, with 10 points and seven rebounds in the half. She also registered three assists early, finding her teammates open when the Madison defense sagged on her. Chantilly hit four threes in the first half, giving O’Brien ample support.

Then things changed abruptly after the break.

“I just told them their intensity was low,” Madison coach Kirsten Stone said when asked what she told her team at halftime. “The thing with this team is I really don’t have to tell them much–they know. But I told them they were playing too much as individuals and not as a team.”

Junior Grace Arnolie opened the third quarter with a three-pointer and the Warhawks’ run was on. The smaller team swarmed Chantilly on defense and out-rebounded them, limiting the Chargers to two field goals in the quarter. They started to move the ball around more effectively and take better shots, ultimately taking their first lead at 31-30 when Grace found her sister Alayna open for another three.

Chantilly never recovered. O’Brien continued to do damage, finishing with 22 points and 14 boards, but her teammates provided little offensive support in the second half. The other Chargers only had four points combined in the second half–both field goals coming on offensive rebounds.

Madison (1-0, 6-0) got balanced production from its starters. The Chargers limited Warhawks leading scorer Grace Arnolie to four field goals attempted, but her sister Alayna stepped up with 11 points and six rebounds. Stone also credited sophomore guard-forward Sarah Link for her play. Link, who stepped into the starting lineup when Kohler and Chapman were injured, had eight points off efficient four-of-seven shooting.

The two Concorde District titans are scheduled for another regular season rematch, but with both teams state title contenders, it is very possible they will see each other in the regional playoffs as well.

“It was a fun game,” Stone said. “Chantilly is a great team and it really could have gone either way.”