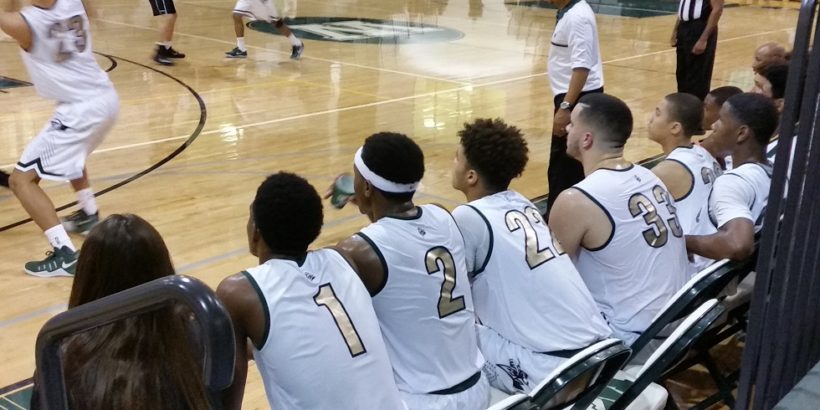 With the game settled, the Wakefield starters could relax and enjoy the final quarter from the bench.
Share List

Normally we give you a box score for the games we cover here at novahoops.com, but that just wasn’t in the cards Monday night as #10 Battlefield visited #2 Wakefield. That’s because if you look down to give a player credit for something, you’ll often miss one of coach Tony Bentley’s players streaking up the court to do something else. We made it about halfway through the first quarter before we decided to replace a stat pen with a hot dog and just enjoy the show.

What a show it was. Wakefield didn’t allow a Battlefield starter to score until the very end of the first quarter en route to a 16-6 lead. The Warriors then put up 45 points the next two quarters and got to the rim almost at will, coasting to a 78-47 victory.

To say Wakefield was able to play at a fast pace was an understatement. While the Warriors forced some turnovers, often they were able to fast break off ordinary misses by the Bobcats, beating them up and down the court. Battlefield players had precious few seconds to rotate back on defense after a miss before the Warrior guards were attacking the rim.

Of course that’s the way Bentley has wanted his team to play for years now. “We played at the pace we wanted to,” he said after the game. “Battlefield is a really good team, tonight I thought we were just able to stick to the game plan.”

Senior guards Alan Treakle and Halil Parks combined for 32 points and junior 6’4″ forward Amari Cooper had 19 points. They’re the stars of the team, but on Monday 11 Warriors scored. Bentley’s team was able to keep the pressure coming with his bench and attack the Bobcats in waves. That overwhelmed Battlefield, which did not have the depth to keep up. It didn’t help that the Bobcats played without senior forward Shonari Street as well.

“Tony does a fantastic job with his guys every year,” said Battlefield coach Randall Bills. “They play the same way and he gets them going all the time–we just didn’t rise to the occasion tonight. Maybe we’ll blame it on the bus ride, but you have to be ready to play. But that’s why we’re playing these games, to get us ready for February and March.”

Dangerous shooting guard Brayden Gault led the Bobcats (0-3) with ten points, but the Warriors (2-0) were able to contain him for much of the night. Gault scored all his points during a just-over two minute stretch before halftime, which shows you how prolific he can be. Athletic guard Joe Davis added nine points for the visitors. They’ll get a chance to get in the win column again on Wednesday, when they host Gar-Field.

The Warriors, meanwhile, head out west for a tournament in Utah later this week. When asked where he felt his team is in the grand scheme of things right now, Coach Bentley laughed. “After the tournament, I’ll let you know where we are,” he said.