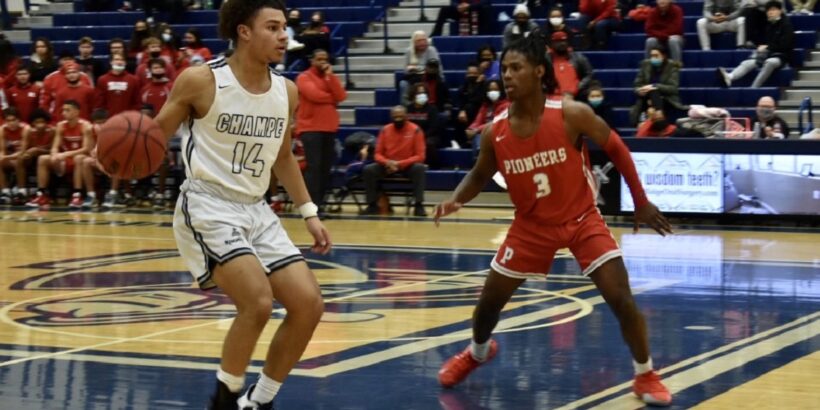 On Saturday Patriot High School’s undefeated record was in jeopardy, as its matchup against John Champe was tied at 45 with two minutes remaining in the game. But the Pioneers overcame the adversity when sophomore guard Dezmond Hopkins kicked a pass out to senior guard Mike Ackerman, who buried a deep three-pointer with 1:28 left in the game.

Ackerman’s shot sparked an 8-3 run which would secure a 53-48 road victory, and help the Pioneers improve to 15-0 and 9-0 in the Cedar Run district.

“We just kept going at it,” Patriot Head Coach Sherman Rivers said. “I was very happy with the win. This is a tough team to play and a tough place to play. We got guys that make plays when we need to make plays – Mike Ackerman made a huge shot from the outside. Nasir Coleman made key plays all game, and made some important free-throws down the stretch. We also got some good minutes from Brady Page, Sam Fernandez, and Dezmond Hopkins.”

Junior guard Nasir Coleman led the Pioneers with 13 points, 5 assists, and 4 rebounds. He also sank 4 of 6 free-throws in the final minute of the game to close out the win. After the game Coleman praised the team’s defensive efforts this season, and their ability to make plays.

“When we lock in defensively we’re a really good team,” Coleman said. “We were locked in today, and we made winning plays.”

Junior swingman Jay Randall also gave the Pioneers a boost, as he recorded 10 points and 6 rebounds. Senior forward Jalen Smith led the way for the Knights with 16 points and 8 rebounds.

Patriot took an early 8-3 lead that led to John Champe Head Coach Walter Webb calling a timeout to help his team reset. The Knights responded with a 7-2 run, but Hopkins split two John Champe defenders for an easy layup as the first quarter ended, giving the Pioneers a 12-10 lead.

The teams traded baskets throughout the second quarter but the Pioneers would get another buzzer-beating layup, this time from sophomore forward Isaiah Vick, which cut John Champe’s lead to 22-21 heading into halftime. The Knights slight advantage was thanks to a strong first half of rebounding.

“They were killing us on the glass in the first half,” Coach Rivers said. “(In the second half) we did a better job of rebounding the basketball, and attacking their zone. I thought we were a little passive in the first half.”

John Champe (7-2, 10-4) led the Pioneers 32-28 with three minutes remaining in the third quarter. The home crowd erupted with applause as its team was beginning to gain momentum. But the crowd’s chants were quickly silenced as the Pioneers went on a 6-0 run in response. Patriot’s run came from transition points that were created off of turnovers.

“Like our coach says, we just need to do everything we can to get stops and that leads to our offense,” Coleman said.

Smith converted a floater off the backboard, as he was fouled at the end of the third quarter. He converted the free-throw, which gave John Champe a slight 35-34 lead heading into the final period.

The Pioneers were able to fend off the Knights in the fourth quarter as they consistently fought their way to the free-throw line and converted 11 of 16 free throws in the final period.

“It’s crazy because our percentages as a team isn’t great, but they make their (free-throws) at the end – so I guess I just need to worry about that,” Coach Rivers said as he laughed. “We find ways to get it done. It’s not always pretty, but we got it done tonight.”

The Pioneers remain in first place in the Cedar Run District with five games remaining in the regular season.

“This puts us two games ahead of everybody in the district, and that’s a good cushion with about five games to go,” Coach Rivers said.

The two teams are scheduled to meet once more in the regular season, this time February 9th at Patriot.