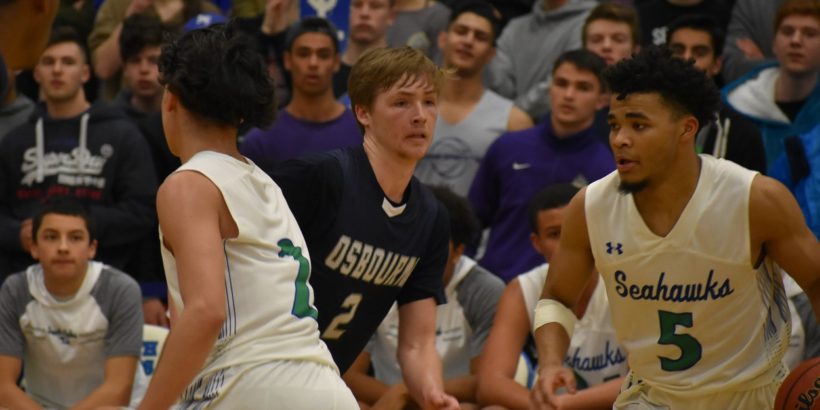 Monday night at South Lakes the Seahawks, with the 6D Regional Final and a berth to states on the line, edged the Osbourn Eagles 43-42.

A few nights after junior Joseph Dagbe’s last-second shot defeated Battlefield, it was senior Cam Savage’s time to shine. In a back-and-forth defensive game where neither team led by more than a couple possessions, Savage scored 12 of his game-high 18 points in the second half.

Two key Savage buckets stood out. With his team held to six points in the third quarter and flustered by an outstanding Osbourn 3-2 zone, Savage buried a three at the end of the third to give his team momentum and a 30-29 lead. Then in the fourth his and-one follow off his own miss gave South Lakes a 35-33 lead with 4:12 left. That was a lead his team would not relinquish.

Savage, a Barton College commit, was also key from the free throw line late. After Osbourn senior forward Marquis Freeman buried a three-pointer to make it 40-39 South Lakes with 30.2 seconds left, Savage kept the ball safe and hit a pair of free throws to make it 42-39. Then South Lakes, which had played good defense of its own most of the night, needed a stop and got one.

Savage came up with the rebound and hit one more foul shot to seal the deal and start the Seahawks’ celebration. Dagbe and reserve senior forward Robbie Owens had six points apiece for South Lakes (19-7), which advances to play at Patriot Tuesday night in the regional final before beginning state tournament play Friday.

Osbourn (20-6) was led offensively by seniors Draykeau Hogan and Jon Hylton. Hylton had 16 points and Hogan hit four three-pointers on his way to 14 points. The Eagles concluded their season with the loss.