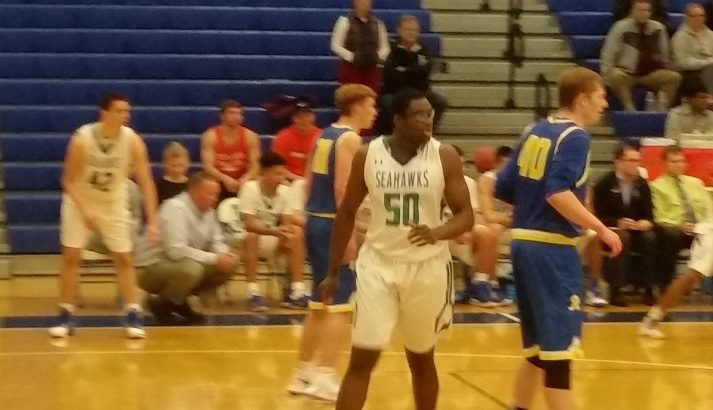 There’s no doubting the ability and talent of 6’5″ South Lakes junior center Emmanuel Aghayere. With basketball at every level becoming more guard-oriented in recent years, Aghayere stands as one of the region’s big men who can still dominate a game.

It didn’t seem like Aghayere would dominate in the first half of his team’s home game against the Robinson Rams on Thursday night. The Rams and new coach Travis Hess like to play with four guards, but can match size with just about anyone. They start 6’7″ junior center Anthony Douglas and back him up with 6’8″ senior Phil Turner and 6’5″ senior Chris Hopkins. The Rams’ size seemed to bother Aghayere early on and the Seahawks’ frontcourt star picked up his third foul with 2:45 left in the second quarter. Up to that point he was being out-performed by Douglas in the stat line.

The second half was a much different story. South Lakes led 33-23 at the half mostly through its guard play, but the Rams clawed to within 33-27 almost halfway through the third. That’s when Aghayere took over. The big man blocked shots, controlled the boards and brought the Seahawk fans to their feet with three powerful two-handed jams. Before one of those jams he single-handedly blocked a three-point shot, recovered the rebound and went coast-to-coast. The Rams were shell-shocked, and Aghayere and South Lakes had a 74-51 victory in the first round of the RAL Tip-off.

Seahawks coach Andrew Duggan wasn’t at all surprised his center eventually dominated. “Emmanuel played well tonight, much like I expected him to,” he said. “I was impressed also with his defensive play against a bigger kid [Douglas]. I thought he battled him for rebounds and positioning all night. One of the reasons he had success was his teammates, though. They played well.”

They absolutely did. Talented sophomore Cameron Savage definitely looks like he has matured his game with a season of starting under his belt. While he tended to force a lot of shots last year, on Thursday he controlled the game for his teammates, setting them up for good shots time after time. The Seahawks drained them, too, hitting at almost a 50% FG clip on the night to include three-pointers. Senior Marcus Cherry was especially potent, registering 18 points in support of Aghayere’s 20.

Robinson, meanwhile, did get a 20-point performance from Douglas to match Aghayere’s, in only his second game as a full-time varsity player. But the Rams’ well-regarded guards, Markos Eyob and Kaleb Hailu, had off nights. Together they made only six of 23 shots with Eyob a very uncharacteristic 1-6 from the line.

The 0-2 Rams started slowly last year as well, so they continue to have high hopes for their season. But it’s South Lakes that felt particularly good on Thursday after avenging a loss to Robinson in last year’s playoffs. The Seahawks looked almost in mid-season form for their opener, and still have four players currently on the football team still in the hunt for a state championship.

That the Seahawks have even more talent on the way can’t be a pleasant thought for their opponents. The fact that Cherry is the only senior on the Seahawks roster can’t be either.

Nor can having to game plan to stop what might not always be stoppable this year–Emmanuel Aghayere.