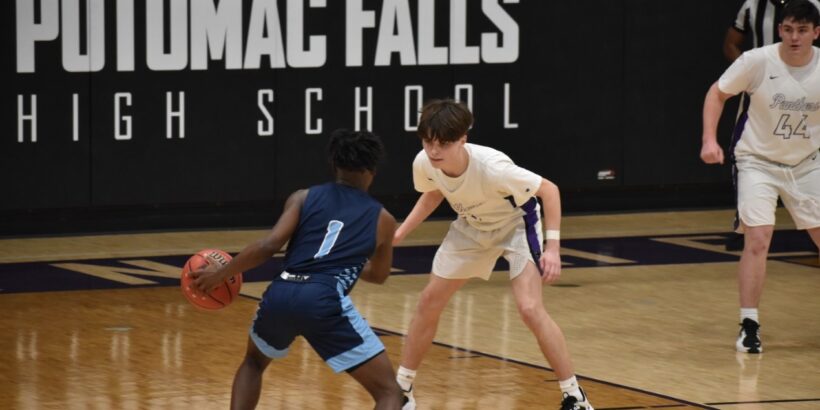 It seemed as if the battle for first place in the Potomac District was all but finished when Potomac Falls led Stone Bridge 47-43 with a minute left in the game. The Panther Pit had erupted with “ohhh PFalls,” chants as the victory was within reach, and spectators were packing their belongings in anticipation of the final whistle.

But the Panthers found themselves heading into overtime after the Bulldogs miraculously crafted a 5-1 run in the final minute, which was capped off by Dylan Hundertmark banking in a running three-pointer as time expired.

Third photo is Dylan Hundertmark’s three pointer at the buzzer sending the game into overtime tied at 48-48. pic.twitter.com/nZGgbvTKq5

Despite the momentum shift and roaring Stone Bridge crowd, Potomac Falls calmed themselves as sophomore guard Johnny Opiola drilled a trey at the beginning of overtime. Opiola’s three-pointer was the start of a 6-1 run that would help the Panthers defeat the defending state champs, 54-52.

“I’m so proud of my kids,” Potomac Falls head coach Jeff Hawes said. “After watching the (game tying) three-pointer bank in – to comeback from that and play as well as we did in overtime … it was very rewarding to find a way to get it done. We’ve got something going right now. This team is believing in each other.”

Sophomore guard James Delaney stepped up for the Panthers as he led the team with 13 points, and junior forward Elijah Adegbenro contributed 12 points and 9 rebounds.

“It felt really good to get the win,” Delaney said. “After the game-tying shot, we knew we had to collect ourselves and keep going back at it. We kept pushing and we got it done at the end of the game.”

Hundertmark led the way for Stone Bridge with 21 points, and senior forward Jacob Thomas also had 18 points for the Bulldogs.

Potomac Falls began the game on a drought, as the Panthers remained scoreless through the first four minutes of the first quarter. But the Panthers defense kept them in the game by holding the Bulldogs to just a 4-0 lead during their offensive struggle.

“We were caught up in the moment,” Coach Hawes said. “We pride ourselves on defense, and that kept us in it. I looked up and we were four minutes into the game, and it was 4-0, and it could have been way worse. In the first half we weren’t real smooth offensively, we were rushing some stuff – I think the kids were playing a little tight.”

Coming off of a timeout, senior guard Kyle Ables scored on a floater that would finally ignite the Panthers offense. Potomac Falls ended the quarter on a 5-4 run, that was concluded by Delaney sinking a corner three-pointer with four seconds left on the clock, which sent the crowd to its feet.

After the game Delaney spoke about making the most of his opportunity, as he had been hoping to get more minutes on the court. He also praised the depth of the Panthers roster, and their chemistry.

“Our team is deep and we’re really connected,” Delaney said. “One through fifteen, we can all go. I think we’re number one because of how close we are.”

Potomac Falls took charge in the second quarter thanks to Adegbenro aggressively getting to the basket, and beating Bulldog defenders in the post. Adegbenro’s eight second quarter points would help the Panthers take a 24-20 lead at halftime.

The Panthers maintained their lead throughout the third quarter, but they also went 0-6 from the free throw line. On the other end, Hundertmark attacked the basket every chance he could get and kept his team alive with five points in the third quarter, three of which came from free throws. Potomac Falls led 35-29 heading into the fourth quarter.

“We hurt ourselves at the free throw line,” Coach Hawes said. “There were several opportunities we had to lengthen our lead, and the next thing you know (Stone Bridge) has a run.”

The Bulldogs began the fourth quarter on a 12-5 run, which put them ahead 41-40 with four minutes remaining in the game. The Panthers responded with a late 7-2 run that widened their lead to 47-43, but Stone Bridge resiliently forced overtime with help from Thomas and Hundertmark.

Potomac Falls now has a two-game lead for first place in the Potomac District, and the Panthers haven’t lost since December 16th. They have won their last three games by a combined total of four points.

“We’re proud but not satisfied,” Coach Hawes said. “It’s a long way to go, we’re halfway through the schedule and to be 5-0 is very exciting. But it was big to get a two-game lead on everyone. We really came together over the holidays. We’re coming together and we always pride ourselves on February. We’re far from done, but we’re happy tonight.”