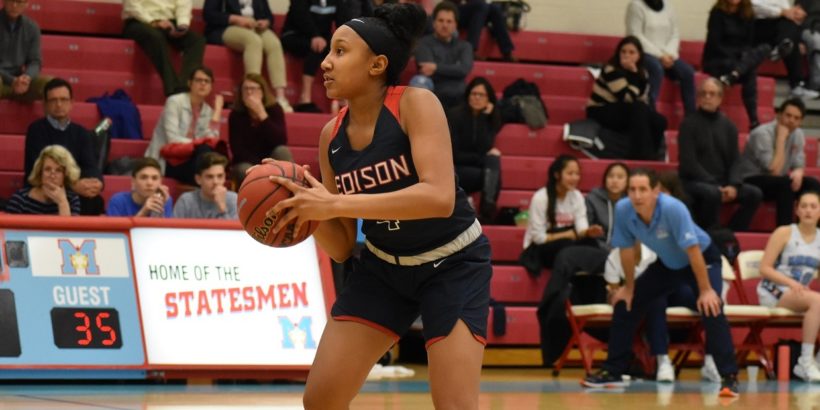 Bri Johns hit six three-pointers en route to 26 points, and the Eagles defense limited host Marshall to 25% field goal shooting in the second half as Edison defeated the Statesmen 61-41 Tuesday night. The victory kept the Eagles undefeated in the National District and assured them the regular season crown.

Johns was sensational, hitting her first five three-pointers in a row. As if her 26 points on efficient 7-12 shooting wasn’t enough, Johns was the leading rebounder in the game with nine.

“Her focus level right now is just going out the roof,” Edison coach Dianne Lewis said of Johns, who will play basketball at SE Missouri St. next year. “She’s a senior who understands what her leadership brings; she’s a senior who also understands what she can do on the court. She’s hard to guard–she can play inside, she can play outside–it’s clicking for her and it couldn’t be clicking at a better time.”

Still, even with Johns on fire, Marshall only trailed 30-27 at halftime. That’s when Edison’s defense started to play better, holding star Statesmen guard Christina Trivisonno scoreless in the second half.

“We’ve been working on our half-court defense,” Lewis said. “We’re working on it trying to get ready for the playoffs. It’s still a work in progress but I thought we did really well with it today.”

Trivisonno still managed to score 13 first half points for Marshall (9-2, 15-6), which will be the second seed behind Edison in the National District Tournament next week. Valerie Dirkse added nine points and Zoe Soule eight in the losing effort.