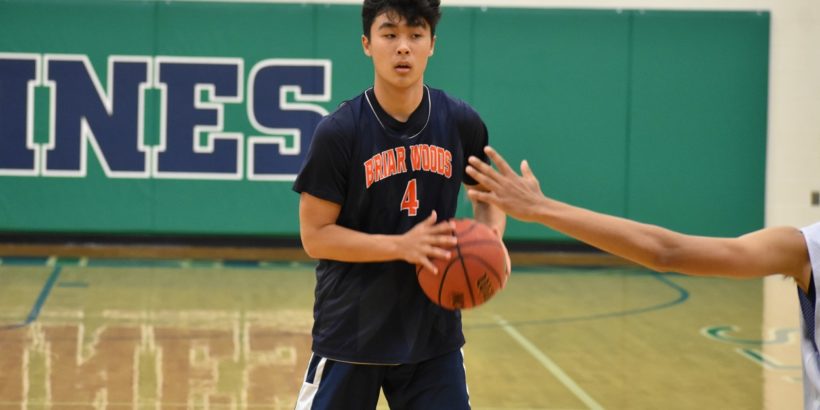 Briar Woods' Will Shin is a player who can fill up the stat sheet in a hurry.
Share List

With seven teams all fairly evenly matched, the Potomac District on the boys side might be the most fun district race in all of NOVA. Last year Freedom finished fifth during the regular season in this district–and then proceeded to make it all the way to the Class 5 Final in Richmond.

Stakes are even higher this year here because this district essentially makes up an entire region for 2019-2020. With only Lee and Jefferson from the National District the only regional competition present, whoever rules the Potomac has a clear road to states.

This could be the year for Briar Woods, a team that has been steadily improving with a roster that is no longer young and inexperienced. An under-the-radar transfer this year, Michael Tehan (County Christian) arrives to play point guard. He will look to create shots for second team All-Potomac selections Aidan Clark and lights-out shooter Will Shin. Clark, an explosive athlete who will run track at Virginia Tech, should benefit most as he can now concentrate more on scoring.

Lots of other experience returns but Coach Butler will rely heavily on Dominic Meyers and Holden Phillips. The 6’4″ Meyers can stretch defenses and his rebounding is essential to the Falcons’ fortunes. Butler says Phillips has always been a good defensive player, but his offense could make Briar Woods extremely difficult to stop. He scored 26 in a playoff win over Rock Ridge last year; if he does that more consistently this year opponents will pay for keying on Shin and Clark.

Only four players return from last year’s squad but they are a talented bunch. Isaiah Rhodes is a tall shooter who can score in bunches. Kling is also very excited about fellow senior Jerome, who he says has demonstrated the ability to lead and help implement Kling’s system. Healy is a wing with extensive experience and Devido is a great all-around athlete.

They’ll need help though in this rugged district. 6’4″ Forward Billy Crichton returns to the team after a year absence and Kling describes him as a high-character guy that could grab headlines this season. Ditto for junior guard Gavin Harvey, a possible lockdown defender key to the team’s defensive goals.

The Rams’ move from the Dulles to the Potomac this year and are well-equipped to compete despite the loss of Simon Weeren to injury.

Six players return from last year’s 21-win squad that won the 4C Regional Championship over Loudoun Valley. Senior guard Beau Everett is the headliner and Coach Koscinski loves the kid. Everett has increased his range and seems able to sore from anywhere on the court. He’s a vocal leader and a tenacious defender who seems ready to take the district by storm.

The other returnees are now used to winning and will contribute. Combo forward Ty Reichard has clearly improved in the offseason and Koscinski says he will have a breakout year. 6’4″ senior forward Shemar Anderson is a transfer from New York who is also a candidate to do so. There’s no dominant height on this roster but there are eight guys 6’1″ or taller. Which is nice.

The Eagles were dealt a blow when leading returning scorer Angelo Easter suffered an ACL injury playing football. Still, there’s more than enough talent here for Freedom to again make a strong postseason run. Rock-solid 6’6″ senior Lance Johnson will anchor the middle and is sure to rack up double-doubles. Senior guard Robbie Kemmerer has always been solid but could be really good this year. Powers describes him as an extremely tough guy who can’t stand to lose.

How much the Eagles lose likely depends on how the rest of the roster progresses. The raw ingredients are there for success. Zach Hoenig is an accomplished shooter. Anish Kalyan didn’t get much run last year but has looked good in the offseason and Powers thinks he can impact the game on both ends this season. Powers is also high on junior guard Jordan Wolin and freshman guard Alex Bokman. Both should be much better players come February as they garner more court time.

Last year’s run gives this team confidence. That could be the difference in a district where everyone is more or less equal.

Potomac Falls had a dominant regular season last year and we would caution people not to sleep on the Panthers this year. They could be really, really good. We agree with Coach Hawes when he tells us their ceiling depends on players who have patiently waited their turn in the system but have not been on the big stage yet.

We know they can only be so bad with Landon Hawes and Jalen Coker on the team. Hawes is a senior shooting guard with great size who was first team All-State last season, while Coker is a fantastic athlete who will play football at Holy Cross. Hawes should be a DI player in the right system.

There’s 10 seniors on the roster–that alone might make the Panthers the team to beat. The Falls can’t replace the graduated Ian Anderson inside, but 6’4″ transfer Will Swarm will help. Coach Hawes cites Alex Munoz as a player that will surprise this season. He plays with a ton of energy and hit some big shots last year. He’ll have to again as defenses key on Coker and Hawes.

The Wolverines lose four starters off a very solid team last year, so there’s going to be a learning curve in their new district. It certainly helps that the only starter back happens to be sensational senior post Brock Redman.

The 6’6″ Redman is one of the better big men around and he’s going to be extremely tough to stop inside. The other returnees range from 6’2″ to 6’4″, so height and inside presence hardly seems to be a problem for Douglas’ team. Add senior Trae Ballinger to that group, a smaller forward who is relentless in the paint, and clearly the frontcourt is the strength of the team.

Others will have to step up if Woodgrove is to finish strong, especially some younger players. Douglas is high on quick sophomore guard Aiden Hodnetta. He’ll be thrust into a lead guard role after playing point on the JV last year. Freshman Macon Dean is a forward with a good inside-outside game who needs to provide some scoring to help a team that cannot play as up-tempo as some of its district-mates.

Those three are all juniors and there’s 12 total on the Phoenix roster, so while Rock Ridge might be good this year they may be even better in 2020-2021.