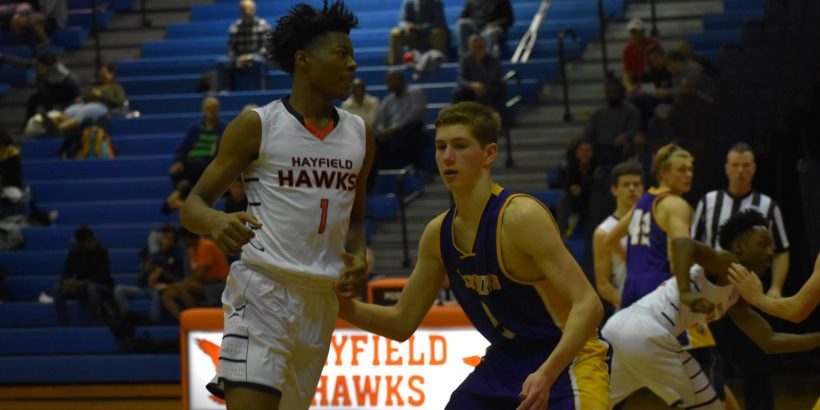 The Hawks' Michael Joiner prepares to cut to the basket. Joiner put it in high gear late to help spur Hayfield to victory.
Share List

Yes, that score was achieved in just 32 minutes. If you’re not familiar with the two teams, Brian Metress’ Lake Braddock team loves to take threes (41 attempts on the evening) and get shots up in a hurry, while Carlos Poindexter’s athletic Hawks love to run the floor and attack the rim. On this evening the Hawks’ ability to attack the rim was the difference, as the Hawks were able to get point-blank looks at the basket against the smaller Bruins. 54 was the magic number for Hayfield–the Hawks got to the line a staggering 54 times on the evening and shot 54% from the field.

There were so many runs and lead changes in the game it would be impossible to document them all here. Suffice it to say Hayfield looked good early, leading 39-30 at one point in the second quarter. Then Lake Braddock went on a 9-0 run sparked in part by star guard Quentin James, who was able to drive and get to the line, also dishing to the Bruins’ potent shooters on the perimeter.

The Bruins led most of the way thereafter, but Cobbs’ Herculean effort (29 points after three quarters) kept the Hawks close. Then Joiner started to take his game to a higher level, sparking the Hawks in transition and getting to the line himself. The Hawks also got a nice lift off the bench from 6’5″ senior forward Jemmori Robinson. Robinson gave the Bruins fits late, controlling the boards and getting his team second chances off misses. Hayfield also upped its defensive game when it mattered most.

One such defensive stop came with around 2:40 left in the fourth quarter and the Hawks clinging to a one-point lead. James made a beautiful move to the hole but was met by Joiner, who lept up and blocked him. Joiner then took the rejection coast-to-coast for the bucket to extend the Hawks’ lead. After that Poindexter’s team could afford to stall a little bit on offense and milk the clock.

James had a nice all-around game for Lake Braddock (2-1), finishing with 22 points, eight rebounds, and five assists. Sam Grable added 14, and Nicolas Margraf was great off the bench, finishing with 14 points, five rebounds, and three assists. The Bruins drained 15 three-pointers on the night and eleven players scored for them. They remain one of the most difficult teams around the region to prepare for and will resume play next week against Yorktown.

Hayfield improved to 5-1 on the year with the Hawks’ only loss coming in overtime to #2 South Lakes on the road. The Hawks resume their difficult schedule next week with games against undefeated South County and powerful Potomac, as well as Robinson.

“So far our guys have gotten tested, against Edison, against South Lakes.” Poindexter said. “Then Lake Braddock comes into our place and gives us one of the best games we’ll probably have all year, and we were able to pull out the victory. I like where we’re at right now.”