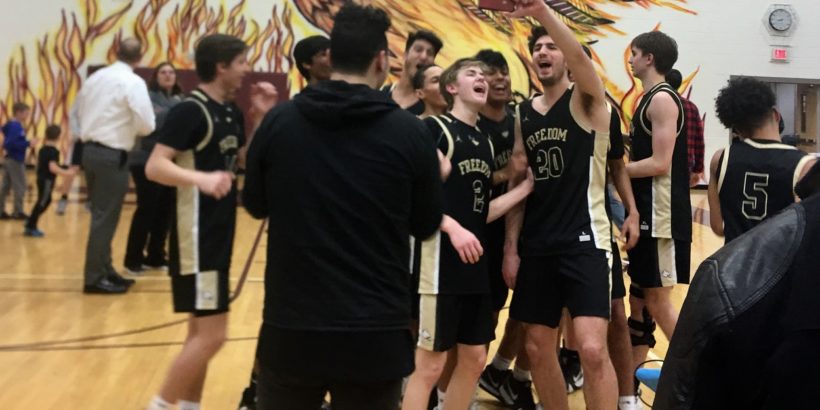 Still work to do for Freedom on Wednesday, but the celebration was on after the Eagles' comeback victory over Potomac Falls.
Share List

On February 8th, Freedom-South Riding lost 70-51 to their cross-town rivals, John Champe, concluding an underwhelming fifth-place regular season finish in the Potomac District. Now, one month later, the 19th-ranked Eagles will advance to the 5A State Championship after scoring 23 points in the fourth quarter to complete a 63-57 comeback victory over Potomac Falls.

“Going into the season we knew we had the talent to play this long but it never really gelled,” Powers said. “We had a lot of guys who got a ton of minutes last year who graduated, so it took us awhile to figure out who’s the man. We learned we don’t have the man, we have a great team and right around playoff time we realized we’re better together.”

There was no shortage of drama in the two teams’ fifth meeting of the season. It was a battle of the district tourney champions (Freedom) versus the regional tourney champions (Potomac Falls). Last year’s Coach of the Year (Justin Powers) versus this season’s Coach of the Year (Jeff Hawes). Both teams were out for revenge as Freedom handed the Panthers their first loss of the season on Feb. 13, but Potomac Falls beat the Eagles a week later in the regional championship.

The atmosphere of the rivalry was apparent from the moment you stepped into the sold-out gym as both student sections exchanged chants and cheered on their classmates. The energy from the gym was infectious as the Panthers won the tip-off and a few moments later senior guard Peter White opened scoring by sinking a three-pointer and setting the tone for Potomac Falls. The Panthers immediately positioned into their patented full-court press but the Eagles were unfazed as they broke the press and Easter answered back with a three to tie the game.

After a Potomac Falls turnover Johnson gave the Eagles a 5-3 lead thanks to a strong finish at the basket. But the lead was short-lived as Anderson began his usual dominance in the low post by scoring a floater and then getting to the line on the next possession. That put the Panthers ahead 6-5.

The game became very physical late in the first quarter as both teams worked to get past each other’s respective zone defenses, and they did so by attacking the basket and drawing fouls.

Freedom gained momentum thanks to multiple trips to the free throw line and a three-pointer made by senior guard Kyle Skinner, which helped put the Eagles up 15-10. However the Panthers would go on a 7-0 run to end the first quarter thanks to Anderson and Coker dominating the boards and second-chance efforts, giving the Panthers a 17-15 lead.

The two rivals traded baskets and trips to the free throw line throughout the second quarter and the teams eventually found themselves tied at 23 with under three minutes to play in the first half. The Panthers heated up again as they ended the quarter on a 5-0 run which was ignited by a three-pointer from junior guard Alec Munoz.

Going into the second half the Eagles found themselves trailing their rivals 28-23, but they remained confident.

“We felt at halftime that they beat us to the loose balls, they were getting too many offensive rebounds and we felt like we needed to do the extra effort things,” Powers said.

The Panthers picked up right where they left off with Coker grabbing every rebound in sight and Anderson finding a way to finish from any angle. Potomac Falls retained a 34-27 lead with less than three minutes to play in the third quarter.

The Eagles battled back to shorten the Panthers lead to just 36-34, which was capped off by a mean crossover from junior guard Robbie Kemmerer who then dished a no-look pass to senior big man Madden Moore for the finish. But despite Freedom’s hustle, the Panthers again pulled away late in the third quarter after Coker dished a full court pass to senior guard Damien Harrison, who converted a layup with two seconds left.

Freedom trailed Potomac Falls 40-34 to start the fourth quarter. It seemed as if the Panthers would begin to pull away as Anderson put the Panthers up 42-36 and Coach Hawes waved his hands at the Panther crowd, signaling for them to rise to their feet and cheer on their team. But the momentum shifted as Skinner hit another crucial three-pointer that cut the lead to 42-39.

The turning point of the game came with less than five minutes remaining in the fourth quarter, as Easter drove to the basket despite two Panthers defenders closely contesting him. Easter made the tough lay-in while also drawing the foul, which made Eagles fans erupt in applause as he tied the game at 45 after sinking the free throw.

Anderson responded with an and-one opportunity of his own for the Panthers, but he missed the free throw. Again Freedom responded with another three-pointer from Skinner, sending the crowd to its feet and giving the Eagles a 48-47 lead they would not relinquish.

With the season on the line, the Panthers began to lose composure as they forced difficult shots late in the fourth quarter. Comparatively, the Eagles were able to secure the win thanks to strong free throw shooting down the stretch, including Easter going 9-10 from the free throw line in the final three minutes of the game.

“We had the motivation to win and we locked in and made our free-throws,” Easter said.

The Eagles eventually secured their 63-57 state semifinals win over the Panthers and the Freedom student section promptly stormed the court to greet their team with praise.

Safe to say Freedom was hyped about the win. pic.twitter.com/asTh4gSYp2

Freedom will head to Virginia Commonwealth University on Wednesday, March 6, to compete for the VHSL Class 5 State championship against Maury high school, who defeated the defending state champs, Varina High School to clinch their spot in the championship.