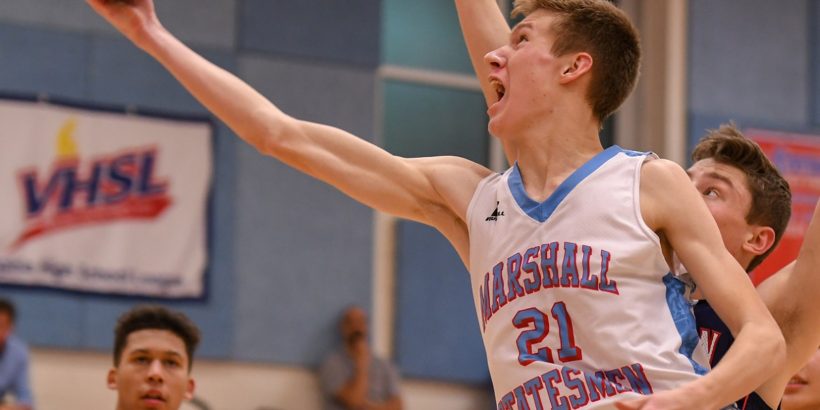 Marshall's Joseph Lampman is known around the region as a hard worker. His (and others') efforts are paying off this year.
Share List

The point is (aside from a friend foolishly betting us we couldn’t randomly work Billy Zane into a column) that even with luck you’re likely only batting .500 most of the time, especially if you’re on the Titanic.

Marshall coach Dan Hale categorized his team as “fortunate” to be 10-2 at this juncture when we spoke to him this afternoon, given his team’s Titanic-like difficult early season schedule. “We could easily be .500 right now,” he told us. That may be, but the fact is the Statesmen are a lot better off than .500. They’re making their own luck–and they’re just kind of good at basketball, which also helps.

You’d have to be to beat South County, Wakefield, and a hot Westfield team on the road, which is what the Statesmen have done. Seniors Ryan Robinson and Joseph Lampman are averaging well into double figures and junior center Daniel Deaver, after benefitting from battling against 6’11” Jack Foley and 6’7″ Jordan James in practice last year, has turned into a double-double machine. Hale raves about Deaver’s work ethic and talent. But it’s not just those three even though they’re the headliners. Lots of players have stepped up to play roles and delivered when their time has come.

“[Junior guard] Ryan Schlaffer hit three threes the other night and does a great job in the front of our defensive pressure,” Hale told us. “[Senior forward] Demitri Gamble hit a couple of big threes in a game recently and has as a captain with Ryan and Joseph really set the tone, accepting nothing less than the best. [Junior forward] Bryce Haase has limited varsity experience but really stepped up versus Westfield when we needed him. People are really embracing roles.”

The wins versus Robinson, Westfield, and South County at the Bulldog Bash after Christmas were all the more impressive because Marshall was missing two rotation guys on vacation with their families. “This team’s length on defense has really given other teams trouble,” Hale says. “Plus we’re just playing hard. I’m fortunate to have a bunch of guys committed to working really, really hard in the offseason, too, and I think that was key.”

As most any coach will tell you, there’s no better way to make your own fortune, or “luck,” than with hard work.

The easiest way to continue our stupid Titanic theme would be to talk about teams that appear to be going under. Well, there’s always next year, since this is high school basketball and not an insanely depressing disaster where people lose their lives. But let’s talk about a few teams that have already shot up flares into the evening sky but will probably be rescued soon.

West Potomac is 2-9 and while we expected the Wolverines to take a little time to get it together, we didn’t expect this. People know how good junior guard Daryl Mackey is, but they tend to dismiss the Wolverines as a one-man show and thus doomed to failure. Uh, no. After watching them fall to talented South Lakes, it’s clear to us the Wolverines have the pieces to succeed. They’re just young, and experienced coach David Houston III is going to find out what works as his team improves. There’s actually a fair amount of talent there, just limited experience.

Frankly we feel bad for you if you under-estimate West Potomac. We still have them, along with most, if not all, of the Gunston District as teams you just don’t want to see in February. If the Wolverines don’t quit and continue to work hard, we see no need to change that assessment and can frankly see them doing a little damage.

Nobody is going to under-estimate Stone Bridge (5-6). The Bulldogs have a stable of talented guards led by junior point guard Evan Buckley, who has an offer from GMU. But can the Bulldogs get where they want to be even with them? While the game has become increasingly perimeter-oriented, Stone Bridge seems to be suffering from a lack of enough presence down low. In a district with talented bigs like Ian Anderson and Hunter Oakford, will the fantastic guard play be enough?

We’re still bullish on the Dogs, who we believe are still a team that can make its way back into the Nova Nineteen. Their backcourt is just too supremely talented to be kept down, plus Stone Bridge has had a pretty demanding schedule early on.

By the way, how good is it to see McLean playing well? When last year ended red-haired Matias Prock was seen clinging to a piece of driftwood…okay, that’s enough. The point is, the Highlanders have won five games and beaten really solid teams like Forest Park, Tuscarora and Woodbridge.

McLean was insanely young and inexperienced last year and that showed in the Highlanders’ winless season. But you could definitely see the talent. While we suspected McLean would have some success this year, it’s always hard not to wonder if kids will get too used to losing when it occurs for so long.

McLean looks like a totally different team this year. On defense they get their hands in the passing lanes and Prock in particular is a threat to pick someone’s pockets and take it coast-to-coast. He’s the team’s catalyst but others are also stepping up. Evan Stout and Sean Senft have each hit for 30 points in a game this season.

We root for everybody in NOVA which means we root for nobody. We’ll just say it’s not hard rooting for McLean this season.

We’ll get another look at the Highlanders tomorrow, and see if they’re ready to win a rivalry game against Langley.