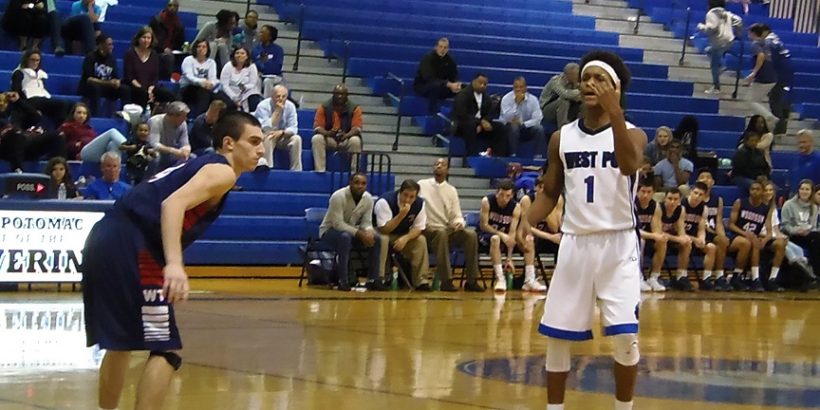 Our fifth-ranked team overall, West Potomac, is the Patriot District regular season and tournament champion and the favorite to win the entire tournament. The Wolverines qualified for states last year and are hungry to return and do even more damage this year.

“I don’t see a weakness on West Potomac,” writer and ex-coach Brian Doyle said on his podcast, NOVAHoopcast, this week. “Obviously they can be beaten like any team can, but with the backcourt they have…they can rebound, they can defend, they have toughness, athleticism. If I’m game-planning against them I’m not sure what to attack.”

Indeed. Senior Khalil Williams Diggins is the headliner at guard, but he has plenty of help. Sophomore Daryl Mackey Jr. is as explosive a scoring threat as there is around the region and two other Wolverines average in double figures. Maybe the best recipe for success is to try and get Idaresit Ekpuk and perhaps one of the Bellfield twins in foul trouble. Easier said than done, and the Wolverines have size off the bench in their frontcourt. But as good as West Potomac’s backcourt is sometimes they forget to go inside enough. We’re nitpicking here, of course, but if you don’t attack the rim and get to the line against West Potomac you don’t have a chance.

Fairfax can tell you about beating good teams, though. They stunned powerful South Lakes twice, once in the conference tourney to reach this point. It’s difficult to see Fairfax’s defense being anywhere as efficient against West Potomac as it was against South Lakes, though. The Rebels do have some height to attempt to pound the Wolverines inside. Their three leading scorers (Jimmy Murphy, KC Colbert, Mahmood Kanu) all are over 6’3″ tall. They’ll pack it in and pray the Wolverines are very off from outside.

Chantilly is a legitimate threat to West Potomac if the somewhat erratic Chargers can survive Stonewall Jackson at home. The Chargers actually won on West Potomac’s home floor earlier in the year, although the Wolverines were missing Mackey for that game. Still, they kept that game in the 50’s and if they can come close to doing it again they’ll have a chance. The Chargers feature balanced scoring and five of their top seven players are seniors, a recipe for success in the playoffs.

The Chargers met Stonewall Jackson earlier in the year at the George Long Holiday Tournament on a neutral floor at Wakefield and prevailed 84-81. The Raiders have two dynamic scoring threats in juniors Jordan Gibson and Antonio Warner and have wins over quality teams such as Woodbridge, Battlefield and Osbourn. They will be underdogs at Chantilly but they are very capable of upsetting the Chargers. It would be utterly shocking if the Raiders can upset both Chantilly and West Potomac on the road, however.

Madison is our 11th-ranked team in the region after winning the Liberty Tournament in impressive fashion over top-seeded Hayfield. They’re led by senior guard Johnny Corish, who averaged about 15 points a game on the year. The Warhawks also have extremely solid, though smaller, frontcourt players in seniors Daniel Gerke and Riley Jorgenson. Both can hurt you inside and out and play very good defense.

“Madison is great at running its sets and making you play defense,” Hayfield coach Carlos Poindexter says. “They have shooters all over the floor so you have to account for everyone. Johnny Corish is one of the top three guards in the region and he makes them go.”

The Warhawks host South County in the first round and should be okay. The Stallions should be more dangerous than they’ve shown this year. Their four leading scorers are seniors and they have a bunch of talented guards led by Nate Avery and EJ Johnson. You would think South County matches up well with Madison. They have interchangeable defenders that may be able to slow down the Warhawks attack and guards that can get to the line. There just isn’t a track record of success that leads you to believe the Stallions can beat a team like Madison on the road.

Robinson and Battlefield have been highly inconsistent this year, but we ranked both among the top public schools before the season started. Both are teams more than capable of advancing to states, but it’s just as easy to see each going out with a whimper. Battlefield lost five of its last seven games after getting hot mid-season. Robinson lost its first four under new coach Travis Hess, won ten in a row and then lost six of its last ten.

Battlefield at home has a big advantage here. The Bobcats played a tough schedule and defeated Freedom-Woodbridge, Hylton and conference champ Osbourn on its home floor. If the Rams are to pull the mild upset they will have to get solid play out of its guards. Seniors Luke Ferguson, Kaleb Hailu and Markos Eyob simply have to step up or the Rams will lose. There’s more to the game than scoring, but those three are contributing around 25 a game this year after scoring around 29 a game last year. Some of that has to do with the emergence of junior post player Anthony Douglas but it’s simply hard to imagine the Rams winning on the road without superior guard play.

Battlefield will look to push the pace and get sharp-shooter Brayden Gault open looks. The higher-scoring this game is the better for the Bobcats.

Osbourn is the champion in this pod though we rank Hayfield higher in our Nova Nineteen. But Osbourn at home is a scary proposition for Herndon, who lost there to open the season, and Lake Braddock or Hayfield.

“What makes Osbourn so dangerous is how hard they play,” Patriot head coach Sherman Rivers says. “Even though they lack overall size you rarely see them lose the rebounding battle. That is a testament to how Rocky has got them to buy in and team rebound. It also helps to have Anthony Pearson who arguably might be the player of the year in the region.”

Pearson is fantastic. Even when he seems off he gets his on offense. The Eagles are equally comfortable playing up-tempo or at a low score, although Osbourn won’t try and run too much with any of the up-tempo teams here. They can be exploited in the post but none of the teams in this pod are post-oriented in the least. The key to their success might be junior Connor WIthers, who is often counted on to provide scoring off the bench.

Herndon is capable of pulling the upset although the Hornets have had an uneven season at best. The Hornets are powered by Liam Harrington and Michael Griffin, one of the best backcourts around. They fell at Osbourn by 15 points but that was back in November and the game was closer than the final score indicated. Herndon will have to limit Pearson and get to the line to defeat Osbourn.

Osbourn played at Lake Braddock’s holiday tournament back in December, but didn’t face Hayfield or Lake Braddock. Those two faced each other, though, with Hayfield defeating Braddock 100-88. Brian Metress deciding to take the Bruins up-tempo is one of the major stories around the region this season, and it has helped turn around their season. But while fantastic Bruins guards sophomore Quentin James and senior Corey Pelham seem even more dangerous at the fast rate of play, this seems to play right into Hayfield’s wheelhouse. An athletic and fast team, the Hawks have no trouble getting up and down the court.

“Hayfield’s a tough team because of their athleticism,” Madison guard Johnny Corish says. “They bring five guys to the boards on offense and defense and that proved troublesome for us. Obviously Langston Gaither is a matchup nightmare, but beyond that their starting five in my opinion in real solid. Carrington Brox is a quiet killer and Brian Cobbs can beat you in so many ways. Overall when they get going as a team and pickup some momentum in transition, there’s not much you can do to stop them.”

Herndon and Lake Braddock can pull upsets, but expect Hayfield to visit Osbourn with a trip to states on the line. Considering that game is in Manassas, we rank it a total toss-up.

You could make the case the Centreville boys are the feel-good story of the year. The Wildcats won their first conference championship since 2001, seemingly coming out of nowhere to dominate the Concorde. Although “dominate” might be too strong a word. Centreville won only six games all year by more than ten points, instead often relying on star sophomore guard Bryce Douglas to win the close ones.

Still, Centreville is getting the job done and seems to be getting better and better. It’s not just Douglas, either. Seniors Marcus Mack and Tyler Lohman have ample experience and talent. Last week at Chantilly for the conference title the Chargers dominated but the Wildcats never panicked, out-scoring Chantilly big in the fourth quarter to take home the title. The Wildcats aren’t going to be out-worked and are going to be tough to defeat, especially at home.

Speaking of working hard, the Patriot Pioneers do just that themselves. They finished fourth in their conference under first-year coach Sherman Rivers and didn’t win a lot of games, but they noticeably improved and are dangerous. The Pioneers are probably a year away, but had wins this year over Hylton, Woodbridge and Stonewall Jackson and even Centreville in the Rebel Roundball Classic. Douglas and Mack didn’t play in that game, but Patriot will not be intimidated by the Wildcats. That’s the first step in pulling a possible upset.

Langley wasn’t particularly competitive in a 60-43 loss at Woodson in December. The Saxons simply aren’t going to win if they give up 60 points–they hit that total only once on the year, against winless McLean. If Langley can hold the Cavaliers to about 50 points they have a chance, however.

A strong start is important and Langley has to mark Jason Aigner at all times. His shooting ability, and Matthew Urbach’s, allow the Cavaliers to extend defenses and attack the rim and get to the free throw line. Woodson has as good a starting five as just about anyone and Brian Peirce would be a sixth man of the year candidate if there was such an award around the region.

It’s hard not to think about Woodson at Centreville here, which would be a fantastic matchup that would likely be extremely close.