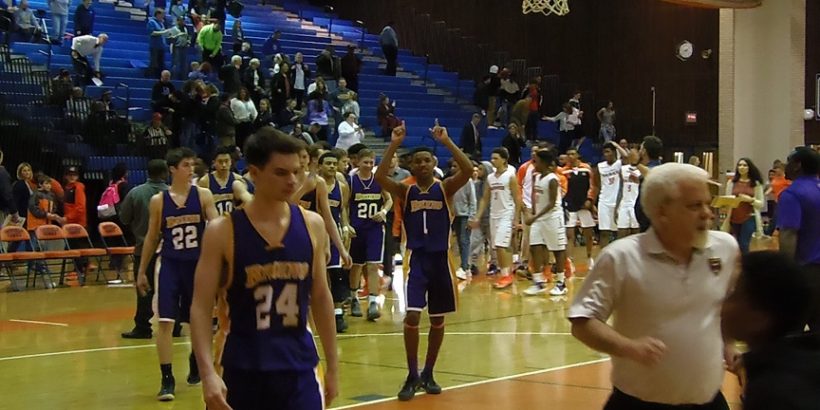 Quentin James (25 points) raises his arms in victory as his Bruins leave the floor. Lake Braddock will host Herndon Wednesday night in the 6A North quarterfinals.
Share List

When the game is close entering the fourth quarter and your star player scores 19 points in the frame, the chances for victory are pretty good. Hayfield had guard Langston Gaither do exactly that in Tuesday night’s playoff game against Lake Braddock. Shockingly, it wasn’t enough.

Despite giving up a double-digit lead late the Bruins defeated the Hawks in a thrilling contest, 97-95. Lake Braddock now advances to host Herndon in a 6A North regional quarterfinal with a berth at states on the line.

The Bruins came ready to play from the onset, racing to a 8-1 lead and forcing a Hawks timeout. Hayfield soon recovered to take a 28-21 lead but Lake Braddock wouldn’t go away. The game remained tight until the fourth quarter which begun with Lake Braddock leading 66-63. One of the craziest, high-scoring quarters you’ll ever see in a high school basketball game then ensued.

Bruins sophomore guard Quentin James hit an off-balance three to start things off. Jordan Cobb then was fouled on a made lay-up. The Bruins forced some turnovers and scored some more. Suddenly it was 77-63 Lake Braddock with the Hawks in serious trouble.

But then Gaither, who the Bruins had at least slowed down a bit for much of the game, became almost unconscious. He just kept scoring while Lake Braddock started to miss repeatedly from outside. Hayfield cut the Lake Braddock lead to 86-81 and then embarked on a 10-0 run capped by a Gaither and-one to take a five-point lead with 2:14 left.

Then it was Lake Braddock’s turn. After a Bruins basket and a stop, Lake Braddock sophomore Sam Grable buried a three with just over a minute left to tie things up at 91. After another stop senior guard Corey Pelham found Cobb open under the basket for a lay-up. Gaither was fouled and converted one of two free throws. The Hawks then fouled Pelham, who hit both of his to give the Bruins a 95-92 advantage with only around a dozen seconds left.

Gaither then drove up the center of the court and with seven seconds left buried an NBA-range three from the top of the key–as he was fouled. The Hayfield home crowd went into absolute chaos then, so much so that fans almost poured onto the court with ample time remaining. Some may have gotten onto the court in fact, as Bruins coach Brian Metress implored the referees to call a technical.

Turned out Metress didn’t need them to. Gaither missed the free throw and Lake Braddock rebounded. As Pelham brought the ball up the court he was fouled. He drained two free throws and after a desperation three by Hayfield missed Lake Braddock had the road upset and Hayfield’s season was over. It was a remarkable win for a Braddock team that would have been the underdog even at full strength, but wasn’t.

“We lost two of our top seven players before the game to injury,” Metress said after the game. “Our second-best three-point shooter broke his hand tonight [Noah Dunn]. The fact that we came over here and beat a team like that, the Liberty District [regular season] champion on the road, it’s a great accomplishment.”

Dunn scored 14 before he went down to injury. James and Cobb led the Bruins (13-11) with 25 points apiece, while Pelham added 20 and was especially clutch going six of six from the free throw line in the final quarter. Lake Braddock as a team essentially won the game from the line, going 23 of 26 for the game. Hayfield wasn’t bad from the line either at 17 for 25, but it just wasn’t good enough on this night when the up-tempo Bruins were playing well.