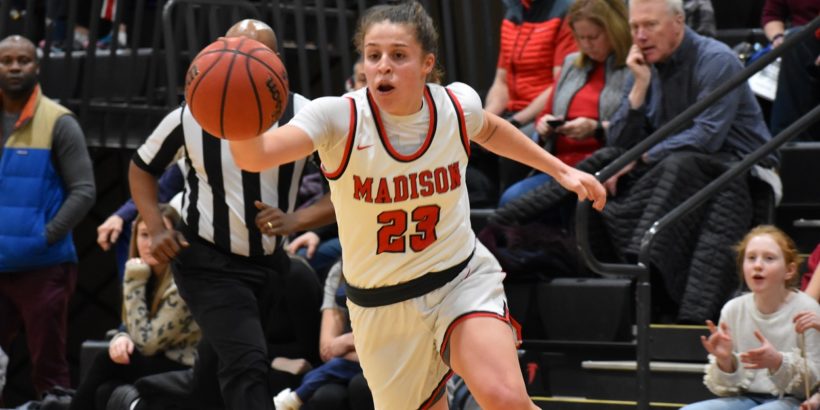 Tedi Makrigiorgos, Madison–“Tedi Mak” took her game to a new level in 2019-2020–on a loaded roster she often was the Warhawks’ strongest offensive weapon. In the state semi-finals against a talented James River team she led Madison with 26 points on five three-pointers. That was the type of production the combo guard could provide whenever necessary. As is the case with her younger sister Amalia, Makrigiorgos plays with unrelenting energy and intensity. Smart as well as a strong defender and ballhandler, she’s going to make an immediate impact for Trinity College in Connecticut next season.

Hannah Williams, Stonewall Jackson–Imagine a 20 points per game (or better) scorer who actually might be feared more for her defense. Well, that’s Hannah Williams of Stonewall. It wasn’t uncommon for her to get 9-10 steals in a game–she averaged around seven per contest–often turning a big game toward her squad with her quick hands and amazing anticipation. Hey, no knock on her offense. The guard poured in points for the Raiders, hitting big shots from downtown and finishing at the rim. Even with all the talent at guard on this team Williams is a no-brainer choice as a “starter” here.

Elizabeth Dufrane, McLean–Not much more to say about the sensational Dufrane. The guard will play at Drexel next season after becoming the all-time leading scorer in McLean history with over 1,300 points. Face-guarded and double-teamed constantly, you could easily argue no local player saw as much defensive attention as Dufrane. A great shooter from deep, she also developed her moving mid-range shot very well the last few years, which will serve her well in college. She’s a capable defensive player too–that would be even more apparent if she didn’t have to work so hard to even get a pass on offense.

Bri Johns, Edison–Honestly with Johns at the four we’re not sure how anyone could stop this offense in the halfcourt. We’re not entirely sure how anyone stopped Edison for that matter. Essentially a tall, strong guard, Johns often led the Eagles in rebounding. Her ability to do that was key for the Eagles’ four and five-guard lineups as it forced bigger teams to send bigs out to guard Johns, who is a deadly three-point shooter. It also allowed Edison to apply constant ball pressure on defense. Johns has an ability to score near the basket and from mid-range. She’ll play at SE Missouri St. next year.

Megan Stevenson, Loudoun Valley–There’s not much the Class 4 first team all-state performer didn’t do for Loudoun Valley this season. She produced a double-double most nights, but also flirted with triple and quadruple-doubles with her ability to register steals and blocks. The athletic six-foot forward is perfect in an up-tempo system where she can use her long strides to get to the rim up front or on the trail. Her ability to protect the paint and quickly outlet to a guard is an underappreciated skill. She’s known around the area for her soft touch around the basket.

Melanie George, Fairfax–We’ve been alternating between George and backcourt mate Sam McNaughton on these class teams since both were freshmen. Both are four-year starters. This year George makes the squad–she had several exceptional games helping young Fairfax to a share of the regular season Patriot District crown. In the space of a week in January she averaged 23.5 points a contest as Fairfax won three of four games. The guard is endless energy and can contribute significantly rebounding the ball against bigger players. George (and McNaughton) will play at Army West Point next year.

Charlotte Jewell, Edison–Jewell finished her career in style with several clutch performances that helped land Edison a co-state title. She’s just a winner. Able to play the point or either wing, Jewell did anything her team asked of her. She’s a good defender, ball-handler, and shooter who is unafraid to take the big shot down the stretch. Ask Marshall–a clutch three from Jewell near the end of regulation in the state quarters sent the game into OT, where Edison ultimately prevailed. Ultra-intelligent, she’ll go Ivy League and play at Brown next year.

Aurea Gingras, Edison–Gingras is the third Edison senior to make the team, and to be honest it could have been four (Kaitlyn Lee). It’s not hard to envision the dynamic guard playing for George Washington in the A-10 next year. She’s got great court vision and reach, helping to make her a good defender and passer. Gingras is perfectly content to just run the show on a good team, but she can be a very efficient scorer/shooter as well. 10-15 points was the norm for her in big games when her team needed it most.

Isabellah Middleton, Tuscarora–You could easily start Middleton on this team but we like her as our sixth woman. That’s because she’s an absolute one-lady wrecking crew, perfect for instant offense and also her versatility. A two or three at the next level, you could play her at virtually any position on a high school team. She’s quick enough to play guard but athletic enough to hold her own at the four or even the five with a small lineup. That versatility is a plus, but even more of a plus is the fact that she averages north of 20 a game and is the all-time leading scorer in Tuscarora history. She’ll play at Slippery Rock next year.

Zoe Soule, Marshall–We are fully cognizant we probably have too many guards and especially point guards on this team, but Soule absolutely earned her way on the squad with an amazing postseason. We can’t stress enough how amazing it was. A night after leading her team with 18 points in a surprisingly easy regional win over South Lakes, Soule went for 17 points in a regional championship win over then-undefeated Madison, 37-35. Oh yeah, that night the Johns Hopkins commit also hit the game-winning reverse layup after a steal. Always well-regarded as a good point guard, that night Soule went from well-regarded to legendary in Marshall athletics lore.

Leila Copeland, South Lakes–Copeland and Soule had some great battles at the point the last two years. Few players could energize her team and fill up a box score in a short time like Copeland could. In a regional win versus Chantilly the Chargers had no answer for her defensively as she poured in 22 points. She can shoot from outside, but we also loved the smaller guard’s leaping ability. In 2019-2020 she grabbed more than her fair share of rebounds and got to the line a ton with that skill plus her insane quickness. She’ll play at Barton College next season.

Gabbi San Diego, South County–If this were an AAU team, okay, we’d have less guards, but we’d also make it a point to start Copeland and Gabbi San Diego together in the backcourt sometimes. That’s just a mind-blowing amount of quickness and explosiveness. After an injury-riddled 2018-2019 we fully expected San Diego to have a monster senior year, and that’s exactly what the Christopher Newport signee did. Even on a team with a lot of talent it was obvious the Stallions needed to have the ball in their point guard’s hands down the stretch. She almost always delivered, most recently with a game-winning shot in OT against Woodson in the district tourney. We’ll miss her but opposing coaches won’t–she’s just a nightmare to play against.

Marya Mufti, Langley–Mufti had an excellent senior season anchoring the young Saxons in the middle. Tall and strong down low, Mufti put up double-doubles regularly. As a six-foot-plus forward-center she could own the block, but she also was surprisingly effective on occasion from the perimeter and in transition. Capable of stealing a pass and going coast-to-coast and burying the occasional three, Mufti has a more well-rounded game than she got credit for.

Sophia Coates, Woodgrove–What a success story for Woodgrove and wing Sophia Coates this year. Coates suffered ACL injuries early in her high school career, only to rebound and be voted first Class 5 all-state her senior season. Put simply, Coates did her job night in and night out. Double-doubles were commonplace in points and rebounds, and she contributed perimeter shooting on offense to compliment her work inside. On defense she constantly surprised taller opponents with blocked shots and was able to defend at multiple positions. She’ll play for Mary Washington next year.

Maggie McGuire, W.T. Woodson–Perhaps nobody raised their stock like McGuire did from her junior to senior year. Well-regarded in a strong Cavalier Class of 2020 for a while, the forward nevertheless had never been voted all-district until 2020. This year she not only hit all-district, she was first team all-region as well. McGuire is a quick-footed, six-footer who can rebound and defend multiple positions. On a very defensive and team-oriented Cavs squad her offensive stats weren’t through the roof, but double figures in points and clutch buckets down the stretch were commonplace. McGuire will play at the University of Guelph in Canada next year.