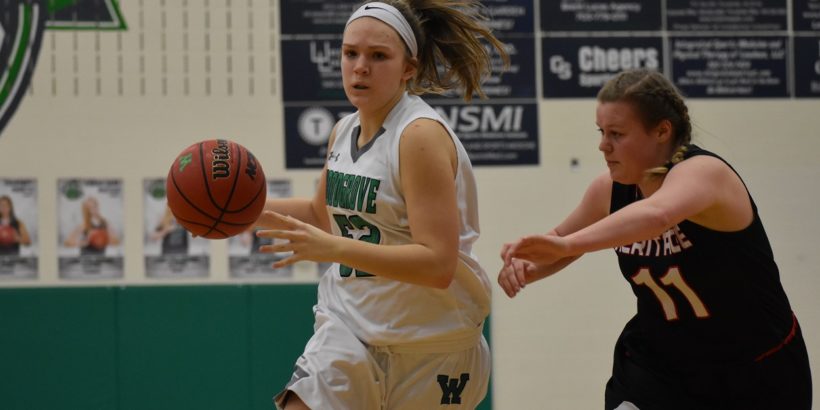 The freshman girls class was extraordinarily deep in 2018-2019, as you can see by the talent listed below in Honorable Mention. Our 10-player freshman team is somewhat forward-heavy but it’s skilled and athletic enough to get the ball up the court in a hurry. The athleticism, physicality, and defensive ability of this team would make any spectator marvel at how these girls are only freshmen. No traditional centers here either.

So, Ashley Steadman can play. The Woodgrove girls quietly had a pretty good season on the outskirts of Purcellville and more often than naught Steadman led the Wolverines in scoring. The First Team Dulles District selection has a really nice shot from the elbows and beyond. She’s got a good height at around 6’0″ and can post up but she’s probably best hitting perimeter shots, suckering the defense out, then getting easy lay-ups with either hand. Takes great angles to the hoop.

Maybe the girl we’re posting up the most on this team is forward Jaelyn Talley. She became a starter at powerful Paul VI as the year wore on which should tell you something right away. Fantastic at finishing anywhere near the rim with ruthless efficiency even in the WCAC, she also is a very solid rebounder and defender. PVI color man Nick Holler also tells us she “sets beautiful screens.” Sounds like a keeper to us. Coach Scott Allen told us Talley provided “a sense of toughness inside being able to score against some of the nation’s top upperclassmen post players, game in and out.”

Talley was Honorable Mention All-WCAC, as was Bishop Ireton’s Kennedy Clifton. Clifton is a fun player to watch. A long 2 or 3, she has a smooth left-handed shooting stroke. Her legs are constantly working hard, making what she does up top seem almost effortless. Pretty solid range and an excellent passer, it’s pretty much just a matter of her getting stronger and continuing to work hard.

Five fabulous freshmen helped power the Madison Warhawks this year. All made an impact but perhaps no freshman in the entire Northern Virginia area made an impact like Grace Arnolie. Arnolie was solid right out of the gate, averaging almost eight a game for a deep Warhawks team in 2018. Then in the New Year she was scary-good, averaging over 13 points a game in 2019 regular season and playoff games. She can hit the three and score in a variety of ways and you have to be a solid defender to play for Kirstin Stone. Arnolie looks like a star. We would be remiss if we didn’t mention her sister Alayna, who deserves to be on this team as well.

Boy, were we impressed with T.C. Williams point guard N’Jya Hopkins this year. All you need to know is coach Lisa Willis was absolutely fine relying on Hopkins in no small part during her team’s playoff run. A starter on a Titans team that could only be stopped by #1 Woodbridge late, Hopkins was absolutely fearless on offense and defense. She has range and can handle the ball and by the end of the year showed amazing basketball IQ for her age, drawing fouls and giving up her body on defense against bigger players. She’s got work to do to refine her game, but Hopkins is one of a very good crop of Gunston District freshmen we’ll be watching closely.

Really like our “bench” on this team. Reina Washington of Stonewall Jackson is a guard that can provide instant offense. She’s got great range from beyond the arc and is quick to pull the trigger if a team is foolish enough to leave her open. In addition, Washington has good court vision and can find her teammates on the break. The First Team Cedar Run District selection should star for the Raiders for years to come.

Fiona Hastick of Paul VI was another freshman mainstay in the Panthers’ rotation. She seemed to get more and more assertive as the season went on and according to Holler “can do almost anything you ask of her.” She is team-first all the way, but can score from both inside and outside. Perfect player to plug in as needed here.

Aaliyah Carlock of O’Connell also had an impressive freshman campaign in the WCAC. An important rotation player from the get-go, the athletic Carlock did more than a freshman should really be expected to do. A nice handle and ability to get to the rack makes her dangerous to score in just a split second from nearly anywhere. It also makes her a candidate to play some point forward. With a great basketball lineage and her skills improving everyday, Carlock figures to be an impact player sooner than later.

The young Herndon Hornets got better and better as the season went on and one reason was Jailyn Alston. Alston, a smooth-shooting guard-forward, dropped 25 in a win over Yorktown in January. You first notice a beautiful shooting stroke when you scout Alston, but while there’s beauty to her game there’s also an edge. She’s hard-nosed and can rebound, going over 10 on more than one occasion. This kid is going to be kind of scary by the time she’s a senior.

Like Woodgrove, we unfortunately didn’t get out to see Brentsville District too much. The Tigers had a good season and have a good one in Cai Smith. Coordination is still coming for Smith but she’s tall and athletic with shooting range. She has the potential to be great. The First Team All-Region (3B) selection often led the Tigers in scoring despite the team having a number of very solid upperclassmen on it. It would be criminal if we didn’t mention teammate Gabby Garrison here, who had a very nice freshman campaign as well.

Our Honorable Mention is stacked. You could argue a ton of them belong on this team and we wouldn’t disagree. One time we were watching basketball and we saw West Potomac’s Samantha Uhrin pull down 20 rebounds against T.C. Williams. True story. Saw Kailyn Pudleiner of TJ grab 14 one time. Eunice Yoon of Woodson, Angel Jones of Forest Park, Annabeth Holsinger of Langley–these are freshmen guards that were handed the keys to the car for very solid teams and did great. Leah Harden of Loudoun County and Yvonne Lee of Broad Run were scoring sparks out west for young teams, as was Isabela Lujan-Gonzales for Mount Vernon. Hayfield had five freshmen (Gillen, Dunham, Ta, Cobbs, Jones) that got really good as the year wore on. What about double-double machine Jane Elkins of Annandale?

We could go on and on…