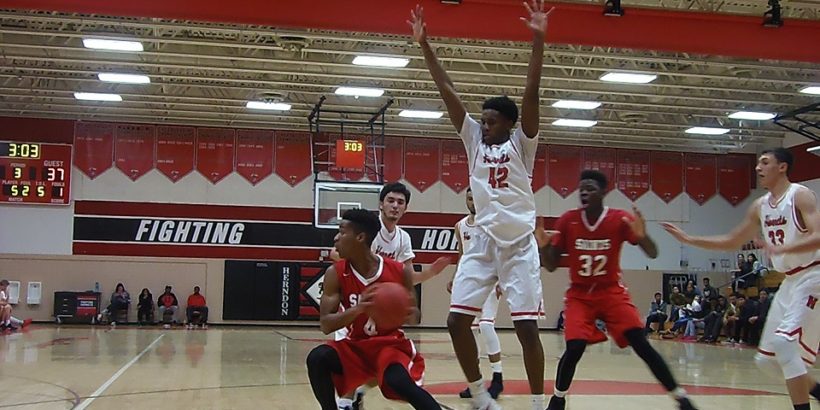 The South Lakes Seahawks‘ season ended in disappointment last year with a first-round district upset loss to Fairfax, but coach Andrew Duggan’s team might just be too powerful for anything remotely similar to happen like that this season. The Seahawks lose leading scorer Marcus Cherry from a team that finished 15-8 but return almost everyone else. Rarely do public school teams lose the player the caliber of a Cherry and get much better the following year, but the potential is there for South Lakes to do exactly that.

6’5″ senior forward Emmanuel Aghayere returns after a junior campaign in which he averaged 13.7 a game. His strength down low and off-the-charts athleticism make him the player opposing coaches have to try and limit first. But any double team on Aghayere comes with extreme risk, as potent guards Cameron Savage (10.0 ppg) and Damon Johnson (7.4 ppg) also return. Although small, both guards love to get out in transition and have become more consistent from the perimeter. Savage has also progressed tremendously learning to run the offense at the point.

Senior forward and Mary Washington signee Andrew Powers (7.2 ppg) is also back. If that weren’t enough, Duggan also has two potentially impactful transfers joining the squad. The first is Boston area transplant Will Rowe, a 6’7″ center. The second is former Potomac Falls swingman Tiquan Saunders, who played on the Panthers’ varsity last year. Duggan also expects contributions from a few members of last year’s JV squad, which finished 12-4, and we haven’t even mentioned like six other guys that played varsity last year.

But even with all these ingredients and their status as Liberty favorites and strong regional contender, the Seahawks haven’t won anything yet. “We do have some things to prove,” Duggan says. “We worked hard to get better individually over the offseason, now hopefully that will translate to us getting better as a team, knock on wood. The biggest thing is, can we continue to grow and learn from our previous mistakes?”

People tended to overlook the Langley Saxons for a variety of reasons last year, but this was a team that faced a lot of adversity with injury and illness and still only finished a game behind regional champion Madison in district play. There might be a tendency to overlook the Saxons again this year because they lost a lot of talent. Sami El-Rafey, Chas Battaglia, Jay Goettman and Grant Hughes accounted for over 35 points per game last year, and they’re gone. Nevertheless, coach Scott Newman has a lot of optimism that his team will be a tough out all year, and he’s hoping his team can challenge South Lakes for the Liberty crown.

The Saxons return senior guard Colter Carlton (11.0 ppg), who has been on varsity since his freshman year. He’s the big name of the bunch, but there’s a pretty impressive senior class in general. While Newman thinks 6’3″ guard-forward Chase Beckett (3.4 ppg) could be poised for a breakout season, the keys to the Saxons’ success this year might be guard Iain Muir (3.2 ppg) and 6’4″ forward Andrew Derminassian (3.2 ppg). Muir spearheads an always tough Saxons perimeter defense and Derminassian has to step up on the glass and in the interior if Langley is to defeat some of the area’s bigger teams.

“I think Muir could be the defensive player of year in the district,” Newman tells us.

Sophomore Tre Vasiliadis moves up from JV. He’s the cousin of former Saxon star Austin Vasiliadis and he’s likely to start making an impact sooner rather than later. Is the talent sufficient to contend? Solid defense and good ball movement on offense are almost givens from Langley, so the nucleus looks to be there for at minimum what should become a very dangerous team no one looks forward to playing.

The Washington-Lee Generals had some notable battles with the Saxons last year. They had a considerable amount of talent but lacked enough consistency to make the regional tournament out of the loaded Liberty. The team lost leading scorer Nicky Miller and shooter Will Wallace, but retain enough firepower to be a regional factor this year if they can play with more consistency.

There’s good odds that they can find that consistency for a couple of reasons: head coach Rob Dobson is in his 25th year and senior Chris Ozgo (12.1 ppg) is back, one region’s better point guards.

“I think he’s the best point guard in the area, to be honest,” Dobson says. “He seems like he makes all the right decisions with the ball.”

Ozgo’s experience, plus his proven ability to score and distribute does give the Generals an advantage, as does having some muscle inside in a district that does not necessarily have a ton of height. 6’5″ Colin MacCullough flashed the ability to control games in the paint last year, and if he stays out of foul trouble should be a double-double machine. The key this year might be sophomore Anthony Reyes. As a freshman he gained valuable experience in the rotation. He’s athletic, can shoot and score and could breakout this year. If that happens the Generals will have a formidable threat inside, outside and on the wing.

Five others return to include rebounding small forward Matt Deily and the ever-dangerous Jake Ruge. Dobson likes the potential chemistry of this year’s squad, and likes his chances this year in the Liberty. “We should be okay,” he told us. “I think we can be as good as anyone in the district.”

The McLean Highlanders aren’t worried about being as good as everybody in the district, they’re just worried about winning a game or two. The Highlanders went winless last year, but it would be a shock if that even came close to happening again. Coach Mike O’Brien knows the talent is there to win some games, he’s just worried his players don’t realize it after his young team took its lumps last year.

“Just the year of physical development and maturity alone should come through this season,” O’Brien says. “Last year our inexperience showed during close games in the fourth quarter. Our team just has to learn to win and once we get that first win I think they will come a lot easier.”

Most everybody returns, to include senior forward Sean Senft (9.0 ppg), junior guards Evan Stout (8.8 ppg) and Matias Prock (7.7 ppg), as well as junior forward Brian Aka (5.7 ppg). O’Brien thinks Aka is poised to make a jump this winter after a good offseason. He’s also hoping others on the roster can step up to help Prock handle the ball at the point. That would free him up to run more plays for plays for Prock off the ball.

McLean is still relatively small inside and remains young, so it’s still going to be hard for the Highlanders to win a ton of games. But they have talent and obtained valuable experience last year, so expect them to take a nice step forward.

An interesting dark-horse in the district are the Herndon Hornets, but they’re likely to take some lumps early. Liam Harrington and Michael Griffin were big enough losses, but the Hornets also lost eight other seniors from their squad that made a surprise run in the regional tournament. Second-year coach Josh Headen thinks his team can still develop into a solid squad despite the losses.

“We’re not necessarily going to have superstars this year, but that might be a good thing,” he says. “We do have a lot of older guys that played down on JV last year because of our seniors, so we may be able to surprise people.”

Headen says his team likely will be more post-oriented this year, which makes sense considering 6’6″ senior Joel Varone is back. Varone noticeably improved as last year wore on and was a major factor in a good many late season and playoff games. Headen thinks Varone has further improved his game in the offseason. If that’s true, and Varone can become a consistent offensive force in addition to the defense and rebounding he already provides, the Hornets will have a much better chance at contending.

6’5″ senior Noah Sweeney, junior guard Jaden Snead and senior wing Corey Myers also return from last year’s team and will see expanded roles. Headen thinks Myers especially might very well come into his own this year. But even with those four guys, help is going to have to come from last year’s JV squad. Guys like junior Trey Lewis and sophomore Armstrong Rehnstrom are going to have to grow up in a hurry and provide scoring punch if Herndon is to match last year’s late season surge. There is ample reason to believe guys like Lewis and Rehnstrom can score proficiently at the next level, but the squad’s lack of experience is going to take time to overcome.

Lack of experience is also going to hamper the Yorktown Patriots this year. That’s perfectly fine with third-year coach Joe Reed, who likes the direction his program is heading in.

“We did well playing in a DC Fall League this year and we were fun to watch,” he says. “I think this year I’m able to implement a rotation that features our top eight guys kind of regardless of position. I know at least we can shoot the ball really well, the key is developing consistency and not looking for ‘my’ shot but finding ‘our’ shot.”

Reed says his team’s shooting allowed the Patriots to overcome some significant deficits in a hurry in Fall League. The Patriots will likely press a decent amount and field a mostly guard-oriented team. Senior guard Matt Coulom returns after scoring around eight a game last year, and junior point guard Ryan Van Kirk will be handed the keys to the Patriot offense. He’s the younger brother of last year’s leading scorer, Connor. Expect fellow junior guard Zack McCoskrie, who was also on the varsity with Ryan to have an impact as well. Yorktown will feature a lot of young talent, to include a few sophomores and freshman Liam Anderson, a 6’2″ guard.

The Patriots will try and impose their style and pace on the opposition because they are not strong in the interior. 6’4″ senior Davis Patterson does return but will likely be unavailable at the start of the season due to his presence on the playoff-bound football team. Rebounding will obviously be an important key to success all year.

“The kids are young, but they seem to be committed to doing the things it takes to build a team and become successful,” Reed says. “I’m excited for the year.”