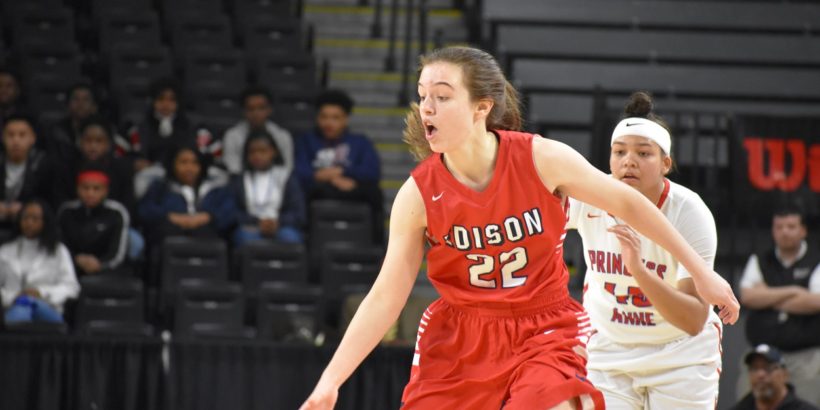 Charlotte Jewell, Edison–Tough as nails point guard who was only underclassman voted to National District first team. Solid ball-handler who can also hit the three, although doesn’t forget defense is what makes her team great. Can play comfortably off the ball as well. Seems to relish big game situations and kept her team in the hunt when it struggled early against powerful Princess Anne in the state final. Recently received an offer to Old Dominion. Part of an amazing Eagles sophomore class that also includes Bri Johns and CiCi Harris, both strongly considered for these teams.

Ajia James, O’Connell–Forward proficient at the mid-range jumper and a very good rebounder. Really upped her game at opportune times this year for the Knights, such as in a win over WCAC powerhouse Bishop McNamara. Hudl highlights here.

“Ajia has great hands for a post which is a big deal! She also just has an incredible natural feel for the game. As a 6’1″ swing player she does it all inside and out. Not to mention she is a wonderful young lady.”

Aaliyah Pitts, Woodbridge–Game progressed nicely from her all-NOVA freshman campaign. She averaged in double digits for the first time in her career for the regional champ Vikings and noticeably got more comfortable overall in the offense, becoming a better passer and more than doubling her assist total from last year. Still an incredibly strong rebounder from the small forward spot and an excellent athlete. Got to the line more and needs only to continue to improve that facet of her game and her consistency from outside to add “super” to her star label.

Aurea Gingras, Paul VI–Maybe you didn’t notice her alongside Collins, Owusu and company. Bishop McNamara didn’t in the WCAC semis, until she buried a game-winning three from the corner with a couple seconds left. Gingras didn’t fill up the stat sheet for the Panthers, but she controlled the ball at the point guard as well as anyone in the region. Has a fantastic handle and is adept at changing her pace to constantly keep defenders off-balance. Hard-worker and very willing defender will score a ton more next year as the demand for it rises.

Gabbi San Diego, South County–Patriot District POY is one of the hardest players in the region to game plan against. Uses her quickness, ball-handling abilities and diminutive size to absolutely slice through defenses. Averaged around 14 points a game but is just as happy threading passes to her teammates after attacking the lane. Has shooting range and is capable of hitting the three-pointer or shooting a quick-release mid-range jumper. Hudl highlights here.

Anna LeMaster, Stone Bridge–First team all-Potomac District and all-region selection did not disappoint after an impressive freshman campaign. Tall guard averaged in the mid-to-high teens scoring and also took pride in often approaching or reaching double digits in rebounds for the Bulldogs. Very good shooter–when running hot was one of the most difficult players around to stop. Already has Division I offers from several schools. Hudl highlights here.

Isabellah Middleton, Tuscarora–Had a solid freshman campaign but really came into her own this year, deferring less to teammates and star older sister Kennedy. A forward who often plays the five for the under-sized Huskies, Middleton was often dominant on the boards this season and always a threat to deliver a double-double. Constantly went coast-to-coast off a defensive rebound or a steal, using her speed to leave defenders in the dust. Hudl highlights here.

Lauren Phelps, Heritage–Led the Pride in scoring and was the only sophomore to be named Dulles District First Team. Has very nice three-point range but also can finish at the rim with both hands. Fiery competitor who is not afraid to do whatever is necessary from a team standpoint to help her team win. Plays tough down low or on the perimeter on defense.

Elizabeth Dufrane, McLean–Sensational shooter now being asked to do more and more for the Highlanders. Led McLean in scoring at about 13 a game. Showed no hesitation as a freshman to take a clutch shot and shows even less now–is fearless on the court. Driving more to the basket and could average 18-20 a game when she learns how to draw contact and get to the line more. Hudl highlights here.

Sam McNaughton, Fairfax–One of these days we’re going to put McNaughton on one of these teams together with fellow sophomore Melanie George–both are incredible players that have been powering the Rebels for two years now. McNaughton showed more maturity at point guard this season, realizing she needed to score more and doing so as necessary. Great size for a point guard with excellent ball-handling ability and can shoot. Already has an offer from George Mason University, as well as strong interest from others. Uses her length to get in the passing lanes and get steals. Hudl highlights here.